Researchers have identified a strange new type of "squidworm" in the ocean depths.
Image 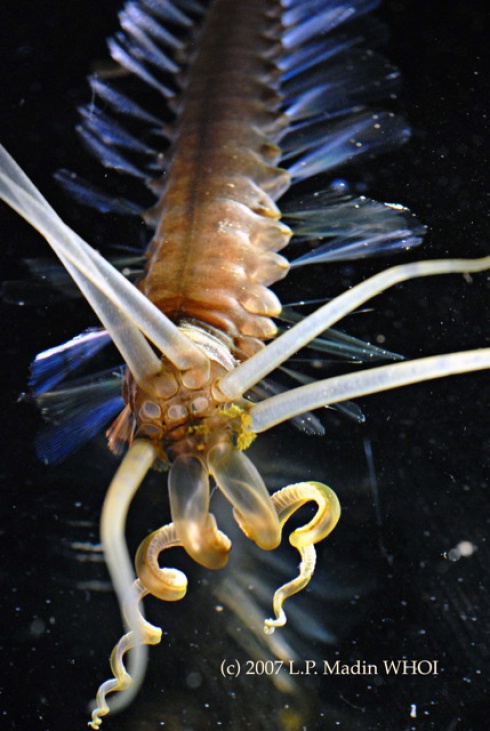 Discovered in 2007, the squidworm makes its way around by relying on frilly organs on its head for smell and what seem to be structures at the tips of its appendages specialized for touch.

NEW YORK (ISNS) -- The bizarre, newly-revealed squidworm -- a free-swimming worm with up to 10 squid-like limbs -- is one of a host of strange discoveries that await scientists in the vast, largely unexplored spaces of the deep ocean.
New anatomical and genetic analysis of the squidworm Teuthidodrilus samae has revealed it to be a segmented worm -- an annelid, just as the earthworm is. But its appearance is far stranger than any backyard night crawler you've ever seen.
The slimy animal's flattened body is about 3.5 inches long. It possesses 25 or more pairs of translucent white paddles arranged on its sides for swimming and up to 10 fragile, tentacle-like appendages at its head that are the same length as its body or longer.
The creature is eyeless, explained researcher Karen Osborn, a marine biologist at the Scripps Institution of Oceanography in La Jolla, Calif. To make its way around, it relies on frilly organs on its head for smell and what seem to be structures at the tips of its appendages specialized for touch or smell.
It was discovered in 2007 using a remotely operated underwater robot exploring the deep waters of the Celebes Sea. This hotspot of diversity is located between the Philippines and Indonesia.
The deep waters of the ocean may be the largest habitat for life on Earth, but they are also the least explored. Plumbing their depths is challenge because of their remote, vast nature and crushing pressures.
"We still have more knowledge more about the moon than about our oceans," said marine biologist Fredrik Pleijel at the University of Gothenburg in Sweden, who did not participate in this research.
Scientists know especially little about free-swimming creatures of the deep because they have proven hard to capture without damaging either the animals or the gear used to gather them. To collect the squidworms, the researchers used both a device that gently sucks the animals into a bucket and an adroitly-maneuvered robot that scoops them up into large open canisters. They caught seven specimens roughly 6,650-9,550 feet below the ocean's surface and, after photographing them live, brought them up to the surface preserved in a formaldehyde solution.
Based on gut contents and videos of the squidworm, the researchers suspect that the squidworm feeds on "marine snow" -- detritus that rains down from the upper layers of the ocean, such as sinking plankton, "fecal material, dead animals, cast off mucus," Osborn said. "Not the most appealing sounding food."
These new findings just go to show "there is an enormous variety of remarkable animals with unique adaptations to that deep habitat that we never could have imagined until we found them," said deep-sea ecologist Bruce Robison at the Monterey Bay Aquarium Research Institute in Calif., who did not take part in this study. "Nature seems to be infinitely variable, and try as we might, we can never anticipate all of the twists and turns she'll take."
The squidworm differs dramatically from all known worms. It is a polychaete, a type of bristly annelid that is generally found in marine environments, and seems to be a missing link between benthic polychaetes living on the seafloor and pelagic ones dwelling much further up. Future research can focus on which benthic polychaetes the squidworm evolved from, and "whether the transition benthic-to-pelagic has occurred once only in these groups or a number of different times," Pleijel said.
Although just one species of squidworm is known to date, the scientists expect more to crop up soon. They suspect a related species was spotted by a submersible off the coast of western India in 2004 at a depth of roughly 3,300 feet (1,000 meters).
Osborn and her colleagues detailed their findings online Nov. 23 in the journal Biology Letters.
Filed under
Animal behavior
Author Bio & Story Archive