The Case Of The Slowing Sugar Maples

Their growth is declining in the Adirondack Mountains, while scientists look for the culprit.
Image 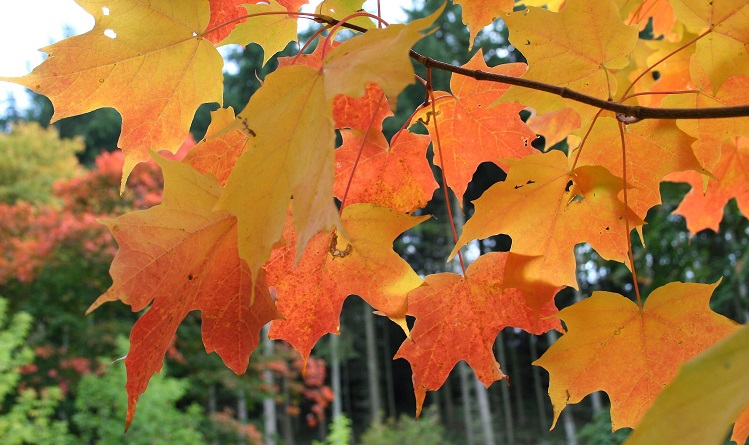 (Inside Science) -- Sugar maples are behaving strangely in upstate New York, according to scientists. While conditions seem ripe for accelerating growth of the maple-syrup source, new research finds that the growth rate of the majority of maples in the region has been in decline for decades.

"It's very alarming to see," said Daniel Bishop, who led the Ecosphere study as part of his master's degree at SUNY College of Environmental Science and Forestry, in Syracuse.

These trees are workhorses. Besides supplying a favorite breakfast topping -- a multibillion dollar industry -- their red and gold fall foliage brings tourists to the northeastern U.S. and Canada. They also boost the forest's ecosystem by enriching the soil with their leaf litter, and producing saplings and seeds that mammals, like moose and squirrels, can forage.

During the late 20th century, acid rain threatened the sugar maple's survival. The rain leaches calcium the trees need from the soil and releases aluminum, which is toxic to the trees.

With the 1990 Clean Air Act, the U.S. government reduced acid rain by restricting the fossil-fuel burning chemical emissions that increase acidity in the environment -- and soils are starting to recover. But researchers wondered: Would the trees bounce back, too?

To find out, Bishop and colleagues looked at sugar maple growth rates in the Adirondack Mountains. They took cores from 242 trees in 18 different sites. Measuring the distance between rings, they calculated how much the tree had grown each year.

Sugar maples can live 300-400 years. The majority of the trees in the study were young to middle-aged for the species -- 75 to 125 years old -- so the researchers had expected to catch them in a growth spurt. Even the climate seemed promising: wetter and warmer conditions than a century ago.

But they found that growth rates for 57 percent of trees have been slowing, rather than speeding up, since the 1970s. They took an even bigger downturn after 1990. Only 5 percent were meeting expectations by growing more swiftly. The rest of the trees didn't show a clear trend, but put on girth faster in some years and slower in others.

Researchers had anticipated they might see a decline in acidic soils. But the study plots encompassed a range of soil quality, including the more alkaline soils that are better for the trees.  While the reductions in acid rain should have spurred the sugar maples' recovery, even good soils showed sluggish growth.

"Reduced growth rates are completely unexpected," said Bishop. "It's not supposed to happen."

"The paper raises more questions than it answers in a way," said Andrei Lapenas of SUNY Albany, who was not involved in the work. He has seen a similar decline in spruce in Russia, and thought the current study was well done.

The authors also investigated whether climate change -- in terms of temperature and precipitation -- may have contributed to the decline. The results were inconclusive, but the authors think climate could be affecting trees in ways that are more complex than what they could measure.

Climate change can create milder winters, which prevent the buildup of an insulating blanket of snow that protects roots from freezing. Damaged roots and mild but lingering acid rain could combine to weaken the trees, according to the researchers, and make them more susceptible to insects that devour their foliage. Other environmental stresses might also make the trees grow slower.

But the authors believe the most fertile ground for answers is the soil. Historical data and modeling may give the researchers a window into how soil composition and acidity has changed over time, rather than how it looks in the single snapshot of the present.

With drones and satellite images, Lapenas also wants to see if trees are making larger canopies -- with more leaves for energy-harvesting photosynthesis -- as they slow the expansion of their trunks. In times of stress, the trees may be "getting better returns on investment" by reallocating resources, he said.

The slowing growth of sugar maples doesn't signal their impending demise, according to Bishop. It might not even affect sap production, he said.

"There's no reason to panic, in terms of maple syrup." But the problem is "something we want to keep our eye on."

Editor's Note: December 7, 2015, 10 p.m.--We have updated the story to indicate that maple trees produce seeds, not acorns. We regret the earlier error.

Alison F. Takemura is a science writer based in Santa Cruz, CA. She tweets @AlisonTakemura.