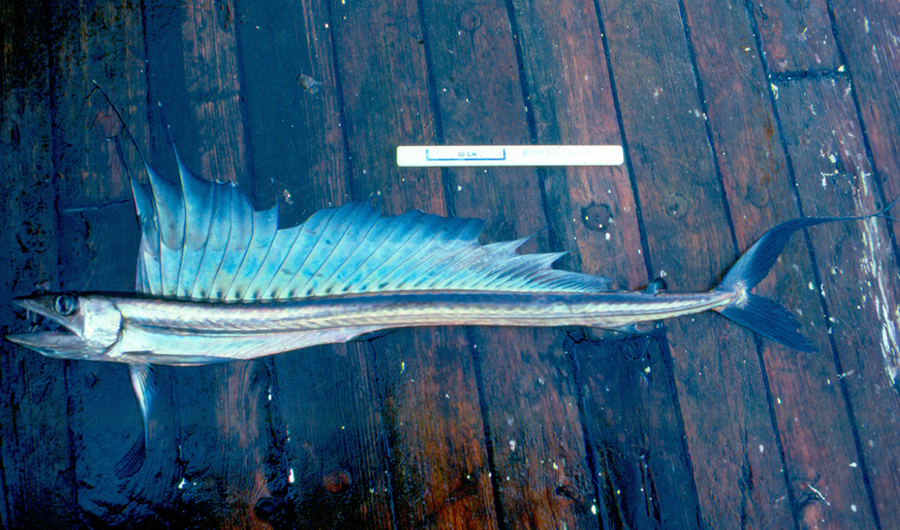 (Inside Science) -- Today, most ocean research focuses on the easily accessible surface and coastal waters. Many mysteries still lie in the twilight or "mesopelagic" zone -- waters of intermediate depth where only a trace of sunlight illuminates the darkness. In a new study, scientists are using a bizarre fish to shed light on the zone's food webs.

The fish in question are called lancetfish, and Stanford University graduate student Elan Portner can’t help but chuckle when he talks about them. It’s easy to see why. Lancetfish could out-compete a gremlin for the most ugly-but-cute monster. They have a dorsal fin like a serrated blade, bulging eyes and long, sharp teeth. But somehow, their slender body and oversized head make them modestly charming. Lancetfish are cannibalistic and hermaphroditic, and because their bodies contain so much water, their muscles are like jelly.

Portner has spent the past four years peering into the bellies of these bizarre creatures. “I am a world expert on a random fish,” he said. “They are insane creatures with crazy lives.”

In a very simplified ocean food web, small animals graze on plants and are then eaten by predators. Those predators are eventually consumed by top predators like tuna, sharks, whales and birds. In the ocean, most of the animals that play an important role as intermediary links in the food web are known as micronekton.

Micronekton are usually about 1-4 inches long. Often shrimp or small fish, they are the "meat-n-potatoes" for scores of sea animals. Micronekton spend much of each day in the deeper waters of the twilight zone, about 660-3,300 feet below the surface, and most are uniquely adapted to low light.

At night, many micronekton feed on sun-enriched plants near the surface. When day breaks, they dive to dark layers of the ocean to hide from predators. Their daily migration brings food to hungry animals in the deep water, where few plants can grow.

Because the deep ocean is expensive to study, the preponderance of research is focused on surface plants and top predators, leaving much of the ocean's food web a mystery.

Scientists want to know more about the important role micronekton play in the ecosystem, but using traditional sampling methods to study micronekton comes with many challenges. They are nearly impossible to identify when picked up by sonar and can easily avoid trawling nets. Even remotely operated underwater robots are expensive.

“The larger the net you cast, the more you find you don’t know,” said Michael Seki, a National Oceanic and Atmospheric Administration research oceanographer based in Hawaii, who was not involved in the study. Seki has tried many different sampling techniques and says when it comes to micronekton, “we are often guessing.”

In 2013, during a routine diet study, Portner and marine biologist Anela Choy found that lancetfish eat a wide variety of micronekton, and digest them very slowly. Excited by the possibilities, they set out to determine if these unique features of lancetfish could lead to an effective new method for sampling micronekton. Their work, published online last month in Deep Sea Research, demonstrates that lancetfish can reveal important information about abundance and distribution of micronekton. But to reach this conclusion, they first needed to catch hundreds of lancetfish.

It just so happens that lancetfish are the number one non-target species caught by commercial long-line fisherman, said Seki. For every tuna that’s caught, fishermen also hook a few lancetfish. Because their meat isn’t very tasty, fishermen typically toss them back into the ocean.

Portner and Choy tapped the NOAA Fisheries National Observer Program to collect 1,371 lancetfish from 2009-15 -- documenting when and where they were caught. This allowed the team to study about 15 million square kilometers of the North Pacific Ocean.

“Every time we opened the stomach, it was like Christmas,” he said. “There would be a pristine dragonfish or a pristine hatchetfish.”

Portner used the stomach contents of each lancetfish to map the micronekton community across the Pacific. He documented hundreds of micronekton species and noticed that different communities congregated around distinct ocean features.

Plus, Portner collected well-preserved samples of a rare fish species called Uncisudis posteropelvis, a type of barracudina. Prior to this study, only four of these fast swimming fish had ever been identified, and only in the larval, or youngest, stage of their life. Portner’s samples bring the total count to nine, including the first described juveniles. No one has yet spotted the elusive fish in its adult form.

Seki was impressed by the study and findings. “This was the best effort I’ve seen using this sampling process,” said Seki. “There is no one sampling method that allows us to understand it all. But this gives a unique perspective that supplements the limited information we already have.”

Portner believes this study is the start of something bigger. “It will drastically improve our understanding of the mesopelagic, through the lens of the lancetfish,” he said, adding that it opens many new opportunities for genetics research, and even helps them understand how micronekton are responding to climate change.

To top it all off, he thinks he may have found a new species of crustacean. The several expert taxonomists he has consulted can’t agree on how to identify it.