Genetically modified yeast with basil and mint genes added gives beer a hoppy flavor without the need to add the actual flowers.
Image 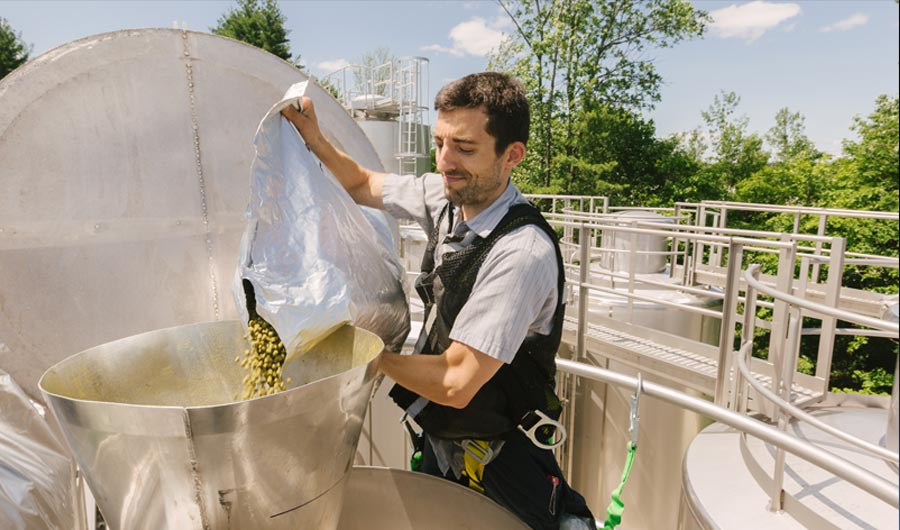 (Inside Science) -- The bad news for environmentally conscious beer lovers is that hops, a prized floral flavoring of ales, has an oversized water bill. Production of the plants requires 100 billion liters of water a year in the United States alone.

The good news: Scientists in California may have found a way to genetically engineer yeast to produce flavors similar to those in naturally hopped beers.

Describing their work in the journal Nature Communications this week, the scientists report how they conducted blind taste tests of their new brews against a traditional American pale ale and found that people ranked the beer produced with the genetically modified yeast as hoppier.

The discovery started as a side project in a University of California, Berkeley laboratory devoted to alternative energy.

Two researchers, Charles Denby and Rachel Li, working in the laboratory of chemical and bioengineering professor Jay Keasling, had been designing ways to insert foreign DNA into yeast and other microbes to produce oils that can be used as biofuel alternatives to gasoline.

They eventually realized they could engineer the sort of yeast used in commercial brewing to make some of the oils -- specifically chemicals known as terpenes.

"It's the same class of molecules that gives beer its hoppy flavors," said Denby.

While recipes vary greatly and beer making continues to evolve, the basic blueprint for brewing beer has been around for millennia. The Babylonians and the Egyptians both made beer thousands of years ago. American Indian nations brewed their own forms using corn since before Columbus arrived in the New World.

The process begins by adding barley or other grains to water to make a "malt." This activates enzymes in the grain to begin naturally converting its starches into sugars. The results are then heated, boiled, filtered, cooled and fermented with yeast, which converts the sugars to alcohol.

Adding hops to beer emerged in Europe hundreds of years ago as a way of cutting the cloying sweetness they might otherwise have. Hops are added to the boiling brews to impart this bitterness. They are also added late in the brewing process, right before adding the yeast, to impart the complex flavors associated with hoppy beers. This is known as "dry hopping."

The effect of the Humulus lupulus hops plant on a beer's taste varies greatly across the more than 30 varieties that exist. Even a single type of hops can vary considerably in its flavors depending on subtle differences in how it grows from year to year and from farm to farm. Even the hops on one side of a farm may be different from that grown on another side, Denby said.

Charles Bamforth, the Anheuser-Busch Endowed Professor of Brewing Science at the University of California, Davis and a co-author on the paper, wrote in an email to Inside Science that achieving consistency in hop character requires selecting the correct varieties and adding them at a controlled time and in a controlled quantity.

Brewers actively seek consistency in hoppy flavor, he added -- as opposed to viniculture, where inconsistency in the flavor of grapes harvested from certain valleys in certain years can lead to particularly prized wines and highly valued vintages.

"We don't play games with 'vintage,'" Bamforth said in his email.

The engineered yeast was designed to replace the dry hopping late in the brewing process that imparts a complex floral bouquet. The team achieved this by taking DNA from mint and basil plants that produce flavorful terpenes similar to those found in hops.

Through trial and error, they produced a number of different strains of brewer's yeast by inserting plant genes that produce the terpenes into the yeast's genome. Then they used fermenters to brew tiny 30-milliliter batches of beer, mimicking the process of an industrial brewer.

The researchers analyzed those "nanobrews," testing them against commercially available beers from the Sierra Nevada Brewing Company, and tweaked the yeast as needed to achieve similar terpene levels. Finally, they selected three strains of yeast that produced a chemical profile similar to a standard hoppy ale without compromising the ability of the yeast to perform the fermentation.

Partnering with Bamforth, they next brewed 40-liter batches of the three strains and kegged them the way you would any ordinary beer. They also made a traditional American pale ale with the unaltered yeast, which was hopped normally for comparison.

One of Bamforth's former students, co-author Bryan Donaldson, was working at the Lagunitas Brewing Company in Petaluma, California. Donaldson set up a sensory analysis test -- two blind tasting panels involving a total of 40 employees of the brewery who sampled 2-ounce pours of the four beers.

"They were asked to rank the beers in terms of their hoppiness," said Denby. The people on the panel identified the beers made with the engineered yeast as being hoppier than the controls, although he and his colleagues acknowledge that they will likely have to engineer in additional terpene molecules to achieve the full flavor of a traditionally hopped beer.

"Does their engineered yeast do enough for brewers to stop dry-hopping their IPAs? Probably not," wrote Oregon State University brewing microbiologist and yeast expert Chris Curtin, in an email to Inside Science.

"But it illustrates the potential for designer yeast to be part of the toolkit brewers [use] when they are crafting new styles," he added.

It's still unclear how the industry will respond, said Bamforth. "Many will not want to use such an approach as they are not keen on the idea of genetically modified organisms," he wrote in an email to Inside Science.

But, he added, "There may be some adventurous craft brewing companies who will be intrigued."

For his part, Denby hopes there are. He finished his work at UC Berkeley last year and launched a company to further develop engineered strains of yeast. The overall goal, he said, will be to offer a way to greatly reduce the environmental impact of making beer.

"That's what we're passionate about and that's why we are working hard on it," Denby said.