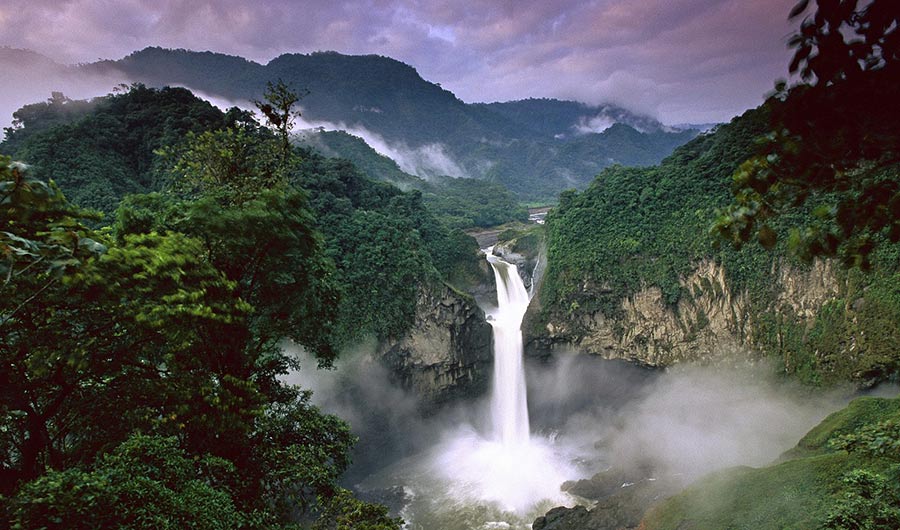 (Inside Science) -- For more than a century, a mystery has preoccupied some of ecology’s best brains: How can tiny patches of some tropical forests host more tree species than entire continents? An analysis of data from ten forests in seven countries has now yielded a possible explanation: Young trees in the tropics compete more within their own species than with others, while at higher latitudes, it’s the opposite. The reduced competition between tropical species allows large numbers of species to flourish.

Ecologists Peter Chesson at the University of Arizona in Tucson and Robert Warner at the University of California, Santa Barbara first theorized the explanation in the early 1980s, to explain diversity among coral reef fish. The researchers noticed that long-lived species could wait out bad years and reproduce during good years. They also noticed that “good years” and “bad years” differ for different species-- one might prefer warmer conditions, for example while another might fare better during colder years. By thriving at different times, Chesson and Warner theorized, a multitude of species could avoid competing for an ecosystem’s limited resources.

The hypothesis has since been demonstrated in specific deserts, lakes and forests. But Joseph Wright, an ecologist at the Smithsonian Tropical Research Institute in Panama, thought the effect might also shed light on a global pattern: the enormous variation in tree species diversity between the high latitudes and the tropics.

Wright hypothesized that in northern latitudes where growing seasons are short, all trees flower and set seed around the same time of year, and a single drought or storm could wipe out a year’s entire seedling crop. But during a good year, seedlings of all species compete for limited resources such as light, water and nutrients. This might make it hard for many different species to coexist.

By contrast, trees in the tropics flower throughout the year. One year, a storm might obliterate the seedlings of trees that flower in May, but trees that flower in September could thrive. The next year, May-flowering trees’ seedlings may succeed while September-flowering ones suffer. So in any given year, seedlings would have to compete with only a fraction of the other species’ seedlings, allowing more total species to grow in an area.

To test this idea, Wright assembled an international team working in forests from just south of the equator to near the Arctic Circle, and included forests in both the Americas and Asia. They counted seeds and seedlings at regular intervals over 10 years in each forest.

The researchers found that the farther from the equator a forest is, the more likely seedlings of different species are to grow at the same time. They put these data into a mathematical model to compare how strongly each species competes with the others versus within their own species. They found that the relative strength of between-species competition versus same-species competition increased by a quarter of a percent for each degree of latitude away from the equator, or around a 15 percent difference between Ecuador’s Yasuni forest and Alaska’s Bonanza Creek forest.

While this variation seems modest in size, its effects could build up over hundreds of thousands of years to dramatic differences in tree extinction rates between the tropics and high latitudes, said Wright’s coauthor Jacob Usinowicz, an ecologist at ETH Zurich. Thus the finding could help explain the astounding biodiversity gradient between the tropics and high latitudes, the authors reported in the journal Nature in September.

“This paper is probably going to change the conversation” about tropical biodiversity, said Chesson. Some ecologists have argued that tropical environments don’t get weather or other disturbances that are extreme enough to disrupt species’ growth and reproduction, but Chesson thinks the new study should put that argument to rest. He added that he would like to see more direct evidence that specific environmental disruptions such as storms change how strongly the trees the authors studied compete with each other.

Some of the paper’s details also raise questions for Jonathan Myers, an ecologist at Washington University in Saint Louis. He’s unconvinced that tiny tree seedlings compete as strongly for resources as the authors’ model assumes. And he wonders whether the authors found enough individuals of rare species -- which comprise most of tropical forests’ biodiversity -- to accurately assess their competitive effects on each other.

But Myers added that it’s “really exciting” that the study shows how differences in flowering time could support the tropics’ riotous biodiversity. And it complements a paper that Myers and others published in Science in July suggesting that species-specific plant disease or other factors could also play a role.

Wright's team's study “forces both ecologists and evolutionary biologists to consider more than one mechanism and more than one scale when trying to understand these global patterns of biodiversity,” Myers said.