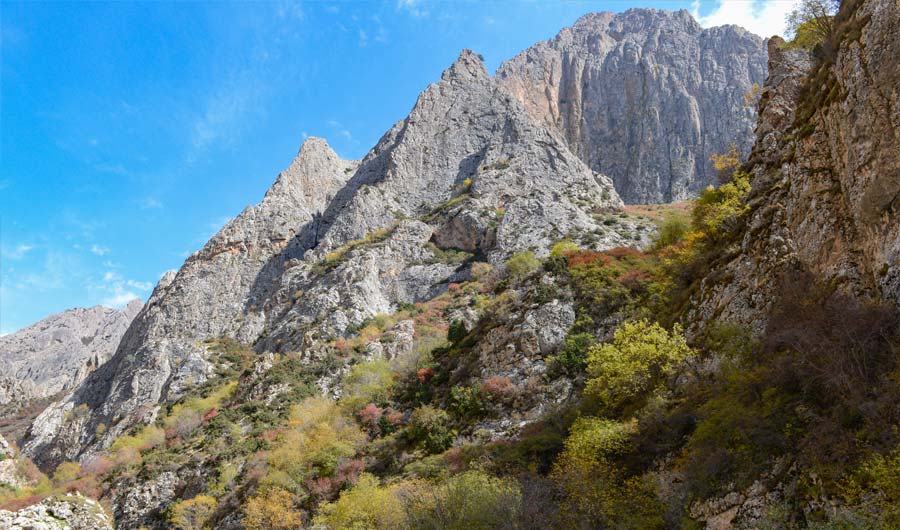 The autumn view of Jiangla River Valley, the location for the cave that housed the newly analyzed jawbone.

(Inside Science) -- A jawbone unearthed in a holy cave in China reveals that an extinct, mysterious human lineage was likely the first to occupy the high Tibetan Plateau, and not modern humans as previously thought, a new study finds.

This is the first confirmed fossil evidence of this ancient lineage found anywhere other than the Siberian cave where the group was first discovered. The findings, however, suggest that many other fossils of this lineage may have already been unearthed, unbeknownst, in China.

Modern humans are the only surviving branch of the human family tree, but others lived alongside modern humans in the past and even interbred with them, leaving behind DNA in the modern human genome. These archaic lineages included not only the Neanderthals but also the mysterious Denisovans, three groups of which left a genetic legacy stretching from Siberia to Australia.

Until now, all the Denisovan fossils that scientists had were a few scraps from Denisova Cave in the Altai Mountains in Siberia. Now researchers have discovered the right half of a Denisovan lower jaw in a cave more than 2,000 kilometers from the site in China.

The fossil described in the new paper was discovered in 1980 by a Buddhist monk meditating in Baishiya Karst Cave, which lies at the foot of a limestone cliff in Xiahe, China. Baishiya, which means "white cliff," is a holy site where local people regularly pray, and they even sleep in the cave for several days if they are sick, said study co-author Dongju Zhang, an archaeologist at Lanzhou University in China.

The monk could tell the fossil was unusual, since it did not have normal human anatomy and was "half-bone, half-stone," Zhang said. Given its extraordinary nature, the monk donated it to a holy man, the Sixth Gungthang Living Buddha Jigme Tenpai Wangchuk, who then passed it on to scientists at Lanzhou University.

The researchers found a heavy crust of carbonate rock on the jawbone, likely accreting onto the fossil from mineral-laden cave water. Radioisotope dating the carbonate revealed the fossil was at least 160,000 years old, meaning it dated to the middle of the Pleistocene, the epoch often called the Ice Age.

The jawbone is the largest Denisovan fossils discovered to date, helping scientists compare its anatomy with that of other lineages. It displays very large molars, a robust shape and a lack of a developed chin, features it shares with Neanderthals and other archaic humans. However, certain features are distinct from those of Neanderthals, such as the shape of the roots of some of the teeth. One of the molars was still erupting from the jawbone, suggesting it came from an adolescent.

The scientists could not detect any traces of DNA preserved in this fossil. However, in one of the molars, they found highly degraded collagen proteins, which study co-author Frido Welker, now a molecular anthropologist at the University of Copenhagen in Denmark, thought might help identify which human lineage the fossil came from.

All proteins are strings of amino acids whose sequences are determined by the DNA used as their blueprints. By analyzing the amino acid sequences of the fossil's proteins, the researchers deduced that the genetic sequences they originated from matched known Denisovan DNA.

The cave's high altitude of 3,280 meters might help solve a puzzling aspect of the Denisovan genome -- they had a genetic variant, also seen in modern populations of the Tibetan Plateau such as Sherpas and Tibetans, that would have helped them cope with the lack of oxygen at high altitudes. "Denisova Cave is only about 700 meters from the ground, not at all at high altitude," said study co-author Jean-Jacques Hublin, a paleoanthropologist at the Max Planck Institute for Evolutionary Anthropology in Leipzig, Germany. "Now we have an explanation for this mutation -- Denisovans or a related population probably lived a long time on the Tibetan Plateau, and this mutation got fixed in their genomes."

Until now, "everybody thought the first humans colonizing challenging environments such as the high altitudes of the Tibetan Plateau were modern humans, who had complex technologies and complex societies," Hublin said. "But at best, modern humans arrived there 40,000 years ago. Our findings show that Denisovans may have lived there 160,000 years ago, right in the middle of what's known as Isotopic Stage 6, which is a glacial episode. That really blows my mind -- who wants to live on the Tibetan Plateau during a glacial episode?"

"There's a strong bias in much of our thinking -- we believe that only modern humans are clever enough to go certain places or live in certain ways," said population geneticist Murray Cox at Massey University in New Zealand, who did not take part in this research. "It's clear we've overestimated our uniqueness. Archaic humans like Denisovans were clearly much more resourceful and adaptable than we have given them credit for."

The scientists are now examining other fossils and artifacts from the cave. They also noted that the Denisovan jawbone resembles fossils of uncertain origin previously discovered in China and off the coast of Taiwan.

"That suggests that other Denisovan remains are sitting in museums around the world, and we just need to put the right label on them to get a better idea of what Denisovans looked like," Cox said. "It's increasingly likely that we already have lots of Denisovan remains, and far from Denisova Cave itself."

Future research may examine both the proteins and DNA from fossils. "Methods that look at protein rather than DNA are going to be especially important for studying remains from warmer regions, where DNA does not tend to survive long," Cox said.

The scientists detailed their findings online May 1 in the journal Nature.