From Fridge Magnets To Magnetic Fridges

From Fridge Magnets To Magnetic Fridges 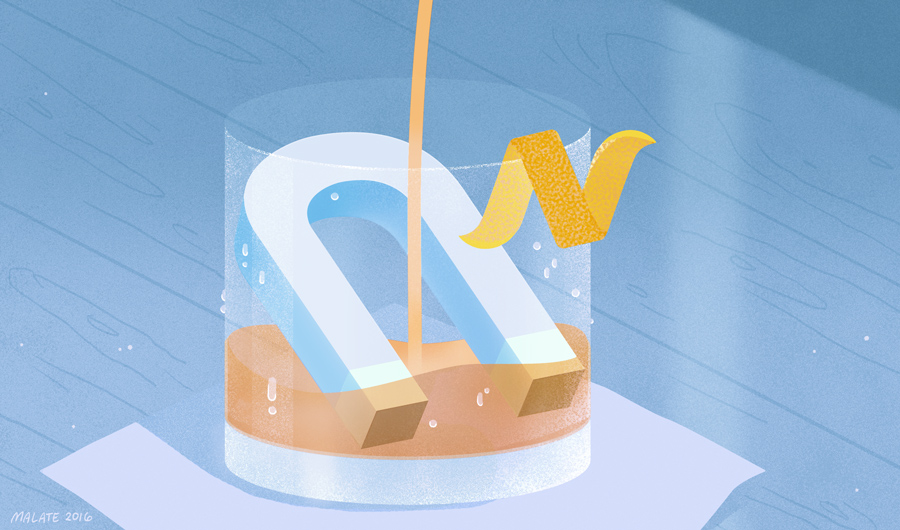 While the advent of magnetic cooling could be as welcome as an icy lemonade on a sweltering day, scientists and engineers must still make improvements to the technology before it finds widespread use in consumer goods and research labs.

The problem with traditional cooling technology

Most of today's refrigerators and air conditioning units cool by expanding and compressing refrigerants, which has multiple downsides.

For one, the laws of thermodynamics restrict the maximum efficiency of this technique to 60 percent, and today's technology is already close to that limit. For an average U.S. household, air conditioning and refrigeration together devour about 25 percent of all electricity used. With the skyrocketing demand for air conditioning in developing countries, there is an acute need for more efficient cooling technologies.

The other downside is the traditional technique's reliance on hydrofluorocarbons, a greenhouse gas even worse than carbon dioxide, and other harmful chemicals in the refrigerant that frequently leak into the environment.

To kill two birds with one stone cold science, scientists have looked to what are called magneto-caloric materials for answers. As suggested by their name, these materials absorb or emit heat when exposed to a magnetic field.

To understand how magnetic cooling might work more efficiently than compressor-based cooling, an analogy might help: Imagine heat as boxes of pizza, and the traditional refrigerant as children in a playground. In order to get rid of the pizzas, we first feed the children the pizzas, then tell them to run around the playground. Then we find extra pizzas, and have to herd them back together to eat more. If you keep finding pizzas, you have to find the kids and round them all up again. Only then can the children eat more pizza, or according to our metaphor, absorb heat. This is analogous to the cooling mechanism used in most of today's devices, which sends coolant around in a long loop so that it can be repeatedly expanded and compressed to absorb and release heat.

Now instead of children in a playground, imagine soldiers in a barrack. Instead of telling the soldiers to run wild, they are ordered to stay put and do push-ups, then eat the pizzas, and repeat.

In this scenario the soldiers are analogous to what is known as individual magnetic dipoles inside magneto-caloric materials. Magnetic dipoles are essentially tiny magnets with a north and south pole. Even a small chunk of a magneto-caloric material contains huge numbers of them. In this analogy, the pizzas, or heat, are consumed by the soldiers doing pushups. In reality, the heat is consumed by dipoles that fluctuate between different directions.

Unlike having to round up the kids on the playground, little to no extra work has to be done to give the soldiers their pizza. This is how magnetic refrigeration is able to get around the efficiency limit for traditional refrigeration. Magnetic refrigeration still uses a fan to blow the air it chills, just like a traditional fridge, but it eliminates the need of a compressor or yards and yards of condenser coils. Magnetic cooling devices are then much quieter and more compact.

Now we just have to train a group of soldiers that will follow our orders.

The competition is heating up

Since 1917 when the magneto-caloric effect was first discovered by Pierre Weiss, scientists and engineers have been trying to use it in cooling. After almost a hundred years of research and development, magnetic fridges are finally beginning to hit the shelves. Haier debuted its magnetic cooler for wine in 2015, and other companies such as GE and Whirlpool are also working on similar technology.

According to Vincent Delecourt from CoolTech, an industry leader in magnetic cooling technology, today's magnetic cooling devices still have a higher upfront cost compared to current compressor systems, but with lower maintenance and energy needs, the users can expect cost savings after about 3 years.

In addition to lowering the manufacturing costs, another way to shorten the payback period is to improve the efficiency of these devices. This was the goal of the research team led by Yang Liu and Lee Phillips from the University of Paris-Saclay. But instead of trying to make a new material that is more efficient, they have discovered new ways to improve the efficiency of an existing magneto-caloric called FeRh, which is made up of the elements iron and rhodium.

Just like many other magneto-caloric materials, the cooling/heating cycle of FeRh exhibits a property called hysteresis, or "memory gap." This "memory gap" means extra energy is needed to change the magnetic state of the material. Hysteresis is essential for making data storage devices -- so that your data doesn't get erased easily -- but it is not so great for making efficient magnetic fridges.

"Hysteresis is bad news," said Lee Phillips, a researcher in the Paris group. "It's sort of like pushing a boulder over a hill both ways, it's just wasted energy."

According to their recent paper in the journal Nature Communications, this inefficiency can be overcome by exploiting other "caloric" effects found in FeRh. These include cooling and heating effects that responds to an electric field (electro-caloric), mechanical stress (elasto-caloric), or pressure (baro-caloric). Combining them can create a greater cooling effect.

"Instead of using a magnet, you just put a voltage across an electro-caloric material, or if you wanted to do both you could use a multi-caloric and get a larger effect -- which means more cooling," said Phillips.

Following the analogy from earlier, this is like developing new exercises for the soldiers inside the barrack -- if magneto-caloric means push-ups, then electro-caloric are star jumps, and then there are also squats and plank poses and more.

Just as a well-designed cross training program could help you to train more of your body more efficiently, a multi-caloric material is more efficient for heating and cooling. By exploiting the different caloric effects, this multi-approach tactic can systematically increase the efficiency in future designs of cooling devices.

Magnetic cooling all the way down 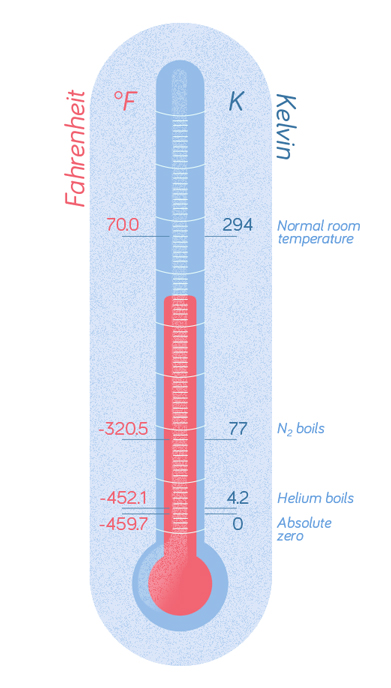 Beyond keeping food and drinks cool, the scientific community often needs to reach much lower temperatures, which currently rely heavily on liquid nitrogen and helium.

While the relatively cheap liquid form of nitrogen can take us down to 77 Kelvin (-320 F), to go further down to 4 Kelvin (-452 F) we need liquid helium, and to go even lower we need an extremely rare form of helium -- Helium-3. Reaching extremely low temperatures is crucial to the study of quantum phenomena such as magnetism, which have been vital to the advancement of modern day electronics.

"Nowadays there is a helium shortage," said Yoshifumi Tokiwa, a physicist from the University of Goettingen, in Germany. "This is a big problem in our research field, so we want to find something that can replace it."

Today, regular liquid helium costs about $80 a gallon, and helium-3 is so rare on earth there have been serious proposals to get it from the moon. These prices will only become more outrageous as supply dwindles. This is because helium is virtually unrecoverable -- if it leaks, it evaporates and then floats all way up into space and is lost forever.

A magnetic fridge can go around all that. However, just like coolants in your car, all magneto-caloric materials only work within a certain temperature range. We already have materials that would work for wine-coolers and fridges, but researchers have struggled to find a material that can cool a device down to ultra low temperatures.

Recently, a group of researchers led by Tokiwa have made a breakthrough in this area. According to their recent paper in the journal Science Advances, they have made a material that demonstrates magneto-caloric behavior from around 2 Kelvin down to just one-tenth of a degree above absolute zero.

The material's ability to cool a system from regular helium temperature down to sub-Helium-3 temperature is very significant -- a $80 per gallon to $9,000 per gallon difference. Given today's scientific funding situation, an affordable magnetic cryogenic device could drastically reduce costs for any scientific labs that requires access to ultra-cold temperatures.

If we stick with traditional cooling technology, by 2030 cooling devices will account for 13 percent of the entire world's greenhouse gas emission. Magnetic cooling could reduce our energy consumption, as well as diminish the use of harmful chemicals and expensive cryogenic liquids.

According to a recent report, the magnetic refrigeration market is set to double every year and reach over $300 million by 2022. CoolTech has plans to launch their first magnetic fridge for use in grocery stores and the commercial market soon, and GE has also announced plans to make magnetic refrigerators available for the general consumer market by 2020. So when the time comes to purchase your next refrigerator, it may come pre-packaged with magnets that aren't made for looking at. They'll be in the back, quietly cooling your food without heating up the planet.

Editors' Note (9/23/2016): This piece has been edited to remove a typographical error and to refine a description of the way traditional refrigeration works. We regret the errors.

Newly Discovered 'Feather Duster' Worms Use Bacteria To Digest Methane in the Deep Ocean
The CRISPR War Raging Inside Bacteria
Around a World That Is Practicing Social Distancing
Disgust Evolved To Protect Us From Disease. Is It Working?
Lab-Grown Meat Climbs to New Heights on Scaffolds of Soy
END_OF_DOCUMENT_TOKEN_TO_BE_REPLACED