As the mother-of-pearl in the inner layer of the shell forms, initial defects attract and eventually annihilate each other.
Image 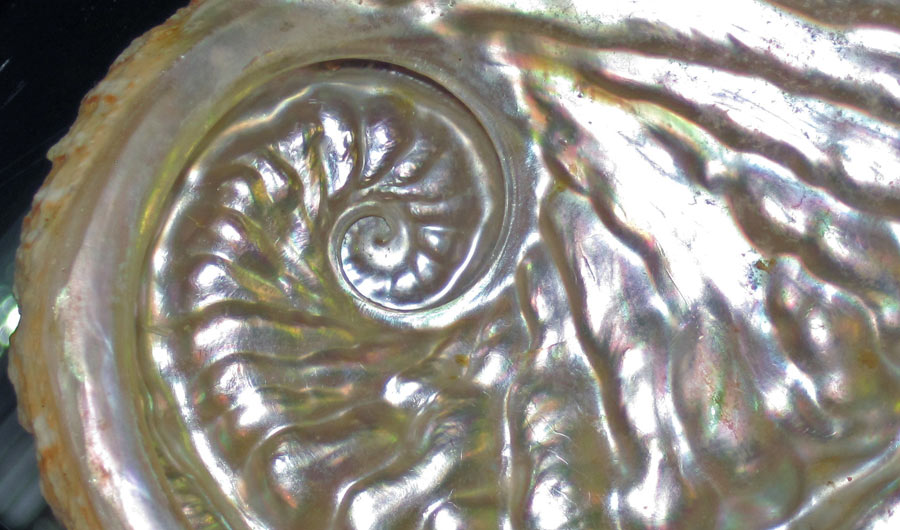 The interior surface of a staircase abalone from Australia at the Bailey-Matthews Shell Museum, Sanibel Island, Florida. The image is cropped from the original.

(Inside Science) -- The iridescent mother-of-pearl found on the inside of many mollusk shells is one of nature’s marvel materials. In addition to its rainbow shimmer, it displays a resistance to fracture thousands of times higher than that of its main mineral building block. Scientists have long puzzled over how exactly mollusks make it. Now, a group of researchers in Europe has offered an unprecedented view of the process.

Using X-rays from a huge machine called a synchrotron, they created a detailed 3D picture of the structure of mother-of-pearl taken from a freshwater mussel. The first layers of material that the animal had created were disordered, with defects that spiraled through like a screw. However, subsequent layers became more orderly, and the final, mature mother-of-pearl looked like a neat brick wall, with tiny, regularly spaced mineral platelets smaller than the eye can see, separated by organic membranes.

Some of the initial spiral-shaped defects twisted around to the right, while others twisted to the left. When the researchers followed the path of these defects through the layers of material, they found that left-handed and right-handed defects were attracted to each other, eventually merging and effectively annihilating each other.

The defects with opposite screw directions find each other because they distort the material, creating forces that draw them together, said Igor Zlotnikov, a materials scientist at the Dresden University of Technology and a member of the team. “The most remarkable initial observation was seeing the structural defects interact from such vast distances. This was unexpected,” he wrote in an email to Inside Science. Zlotnikov’s group studies how a variety of organisms, including marine sponges and mollusks, create mineralized biomaterials.

While scientists are still not sure exactly how mother-of-pearl's structure leads to its amazing physical and optical properties, the new findings give insight into how animals create it in the first place. They show how physical processes -- such as the distortions generated by structural defects -- can induce the emergence of order in biological systems, Zlotnikov said. It’s possible the techniques the team used could also be deployed to better understand how similar organic structures such as bone or exoskeletons form. The researchers published their findings this month in the journal Nature Physics.