How Plate Tectonics Could Make Rocky Planets Hospitable to Life 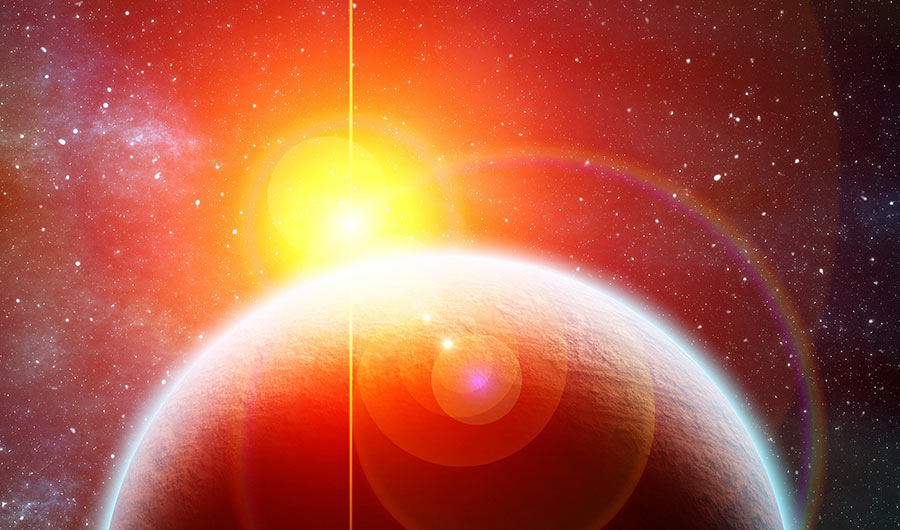 Illustration of a planet orbiting a red dwarf star

(Inside Science) -- Shifting, slipping and colliding tectonic plates played an essential role in the emergence and evolution of life on Earth. Such tectonic activity generated volcanoes that spewed carbon dioxide and other gases into the air. Rain brought the gases down to Earth, where they were pushed underground again by moving plates. For billions of years the cycle has regulated the climate and stabilized the temperature, which helped enable life to arise.

Plate tectonics like what's seen on Earth seems rare -- no other world in our solar system has tectonic activity currently -- but scientists now argue there could be a different way to generate an active crust on alien worlds.

The researchers argue that a planet orbiting close to its host star can experience stresses from that host's gravitational pull. Those stresses then weaken the outer crust, aiding or generating plate tectonics similar to those seen on Earth. That process could increase the likelihood of life developing on these planets.

“We’re the first people to actually apply this calculation to other planetary systems,” said J.J. Zanazzi, an astrophysicist at the University of Toronto. Zanazzi and Amaury Triaud, an astronomer at the University of Birmingham in the U.K. are publishing their findings in the journal Icarus.

“To get plate tectonics, we need these tidal forces to be acting for geologic times and to be strong enough to weaken the crust,” said Bradford Foley, a Penn State University geophysicist. If a world’s host star stretches, flexes and squeezes its crust enough for millions of years, plates could develop and start moving.

Most stars burn so bright, however, that a planet close enough to experience tidal plate tectonics would get too hot for life. Fainter red dwarf stars provide a fruitful compromise, since the range of distances where a planet would have star-generated tides could overlap with that of the “habitable zone,” the region around a star that’s not too hot or too cold for life and allows for liquid water on the planet's surface.

But not just any closely orbiting planet will do. The tidal stresses need to cause some plates to gradually move beneath others -- a process called subduction -- and for that to happen, the stresses need to vary. This can happen if the orbit is a bit noncircular or if the same side of the planet doesn’t always face the star. Zanazzi and Triaud identified more than 40 potential planets with the necessary characteristics, many of them discovered by astronomers using NASA’s Kepler space telescope. The list also included planets orbiting TRAPPIST-1, an ultracool red dwarf star that astronomers recently discovered was surrounded by seven planets. Most of the more than 40 worlds that the researchers identified orbit red dwarf stars more closely than Mercury orbits our sun and make a complete trip around their stars in less than 10 days.

“If these planets have plate tectonics, it offers a way to stabilize the amount of carbon dioxide in the planet’s atmosphere and not have the planet undergo a runaway greenhouse effect,” Zanazzi said, referring to Venus, whose atmosphere became clogged with carbon dioxide, eventually causing its oceans to boil away.

Telescopes scheduled to become operational in the 2020s, like NASA’s James Webb Space Telescope and the European Southern Observatory’s Extremely Large Telescope in northern Chile, are designed to probe distant planets’ atmospheres for a variety of life-friendly signatures, including indicators of volcanoes, like sulfur dioxide.

But just because volcanoes are there doesn’t mean astronomers will be able to notice. “Sulfur dioxide gets washed out efficiently from the atmosphere, so you need explosive volcanoes to shoot it up high enough,” said Lisa Kaltenegger, an astronomer at Cornell University in Ithaca, New York.

After an eruption, sulfur dioxide usually dissipates and disappears from the atmosphere in a matter of months -- a tiny window of time. To belch out sulfur dioxide at levels that astronomers could detect, she argues, a planet would have to have numerous simultaneously or frequently erupting volcanoes, like on early Earth, or one 10 times more powerful than the massive 1991 eruption of Mount Pinatubo in the Philippines.

The worlds that host life, especially the kind that might be detectable from this solar system, likely make up just a fraction of all the inhabited planets. “We are limited to finding gases in the atmosphere, but life could develop underground or in an ocean,” Kaltenegger said. Such aliens would give few, weak signs of their existence to Earthling astronomers so far away.

Nonetheless, the new research indicates that spotting evidence of volcanic activity on a planet close to a red dwarf may be both a good sign of tectonic activity and a higher chance of extraterrestrial life.