How These Sharks Glow Neon Green 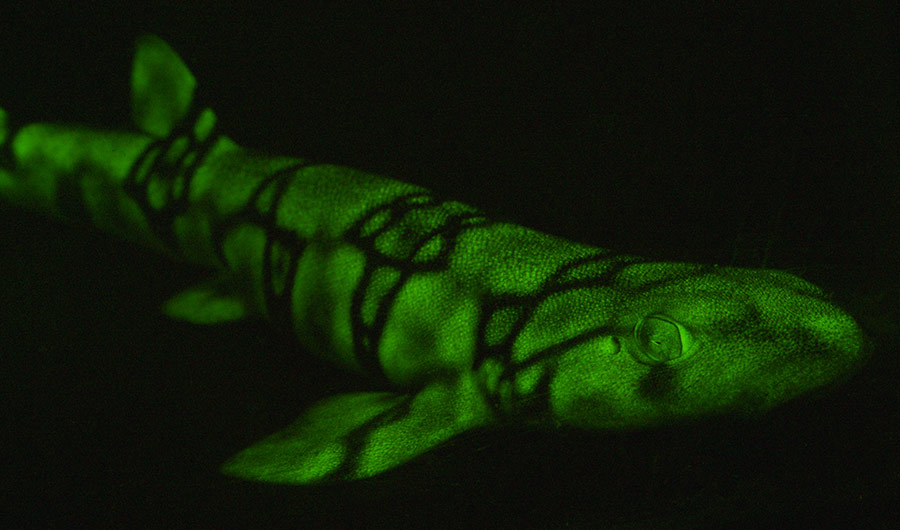 (Inside Science) -- When we look at the seafloor, we might not see the bottom-dwelling sharks that blend in with the rocks and the sand. But to other sharks of the same species, they stand out like green glow sticks. Now scientists know how.

In 2014, marine biologist David Gruber, from the City University of New York, and his team discovered that two species of bottom-dwelling sharks are biofluorescent. The swell shark is native to the Pacific Ocean, and the chain catshark is from the Atlantic Ocean, but both species live in similar habitats and both glow neon green. Under blue light, the lighter, gray-colored areas in the skin of both sharks give out a neon green fluorescent hue, visible to other animals -- and with the help of a filter, to humans too.

Gruber had previously discovered that swell sharks and chain catsharks have special vision that allows them to see other glowing sharks. For the new study, published today in the journal iScience, he teamed up with Jason Crawford, a chemical biologist at Yale University in New Haven, Connecticut, to understand the chemistry behind these creatures’ amazing ability to transform the blue light that reaches the seafloor.

They took samples from dark and light skin of both sharks and separated them into their molecular components. They found five small, biofluorescent molecules that are only present in the light skin.

“We didn't really know what to expect going into it,” Crawford said. “We were delighted to find small molecules as being responsible.”

These new molecules could add to the natural and synthetic biofluorescent molecules already used in research, and perhaps find a use in biomedical imaging.

In the light skin, a molecule called bromo-tryptophan breaks down into the five newly identified green-glowing molecules. However, in the dark skin, two bromo-tryptophan molecules come together to form a new molecule that has antimicrobial properties, the team showed.

Although they only tested the antimicrobial features in disease-causing bacteria in the lab, the researchers think that these molecules could have an important role in protecting the sharks against pathogens on the seafloor.

“This calls attention to some of the lesser-known, underdog sharks that have hidden superpowers,” said Gruber. “It just shows how much more there is to learn about these wondrous creatures.”