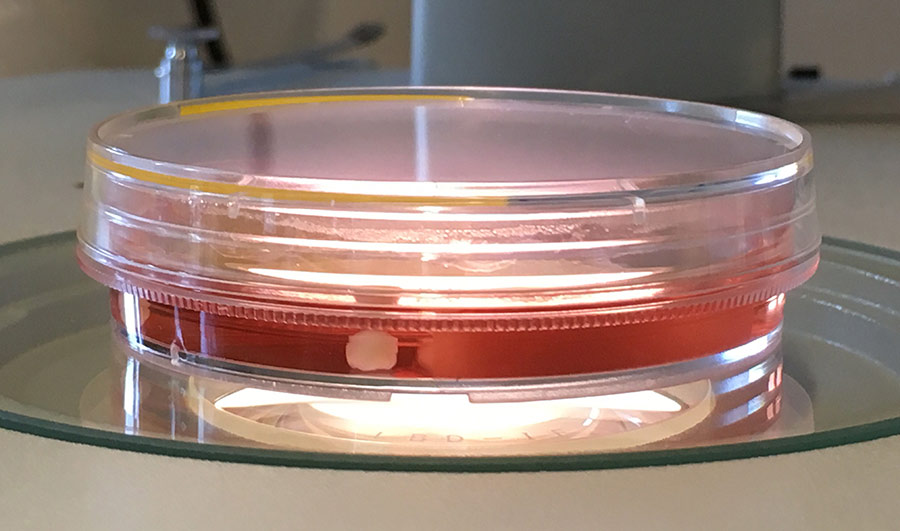 (Inside Science) -- From our earliest days in the womb, our brains develop rapidly, taking thousands of developmental steps that send us along the "human" path rather than that of, say, a chimpanzee. Now, researchers are gaining an unprecedented look at those hidden developmental stages, thanks to lab-grown objects called "brain organoids" that resemble miniature brains the size of apple seeds.

"A lot of the divergence between humans and chimpanzees really can be traced back very early in brain development," said Gray Camp, a stem cell biologist at the University of Basel in Switzerland. "[Organoids] really provide a system that we can use and control and manipulate, and it doesn't involve any human or animal tissue from individuals."

Camp co-led the new study with Barbara Treutlein at ETH Zurich's biosystems science and engineering campus in Basel. It was published today in the journal Nature.

Organoids are grown from stem cells, which have the potential to grow into any cell type in the human body. Researchers can create different types of organoids by giving stem cells just the right signals to prod them in certain directions.

In brain organoids, the stem cells develop into neurons that arrange themselves into something resembling a miniature brain. Major components such as the hindbrain and forebrain may not always develop in the same area, and sometimes they don't show up at all. After six to nine months of development, the neurons start to form connections and exchange electrical signals, although the organoids in the current study weren't allowed to develop that far, said Camp.

Of course, brain organoids are not the same as real developing brains. They lack blood vessels and other types of cells that normally migrate in from other tissues, and they don't grow more than a few millimeters long. But past research has shown that many developmental processes are faithfully re-created. Organoids give researchers a way to model brain development at many points in time, without having to rely on actual brains from deceased lab animals or humans.

In the new study, the researchers grew organoids from human and chimpanzee stem cells, as well as from stem cells from monkeys called macaques. At various time points between five days and four months, they took a subset of the organoids, separated the cells and examined which genes were active. They also looked at how the DNA was coiled for clues about how gene activity was being regulated.

The most striking finding was how much later the human organoids reached developmental milestones.

"The human organoids tend to develop a bit slower than the chimpanzee, and especially the macaque," said Camp. "The amount of time that it takes the neurons to mature has changed during evolution."

Past studies using real tissues have also found that humans have slower brain development than other species, said Camp. The new findings show that organoids can be used to study such timing differences.

The researchers also found many differences in gene activity between humans and our primate relatives at different stages of development. At present, it's hard to know what those differences mean, but Camp and his colleagues have a plan for finding out. They want to swap out key pieces of DNA in human and nonhuman organoids, inserting a bit of human DNA into chimpanzee stem cells and a bit of chimpanzee DNA into human stem cells, for example. By studying how a swapped DNA sequence alters organoid growth, researchers should be able to pinpoint exactly how that stretch of DNA helps make us human.

"It's a really exciting time. I think these early studies are just the beginning of what we can do," said Alex Pollen, a stem cell biologist at the University of California, San Francisco, who conducted a similar study with chimp brain organoids earlier this year. "I think these are fundamental questions about our own origins -- understanding how we became human."

The evolutionary insights from brain organoids may lead to discoveries about disease and disorders, according to Camp and Pollen. Recently evolved traits tend to be more prone to dysfunction, since evolution hasn't had time to work out all the kinks. For example, back pain and birth complications are thought to be related to our species' relatively recent habit of walking upright.

No change has been more dramatic in human evolution than the expansion of our brains, said Pollen. Studying how that unique expansion happens could reveal why it sometimes goes wrong.