People who eat fish from glacial meltwater may be at risk from persistent organic pollutants produced in the 20th century.
Image 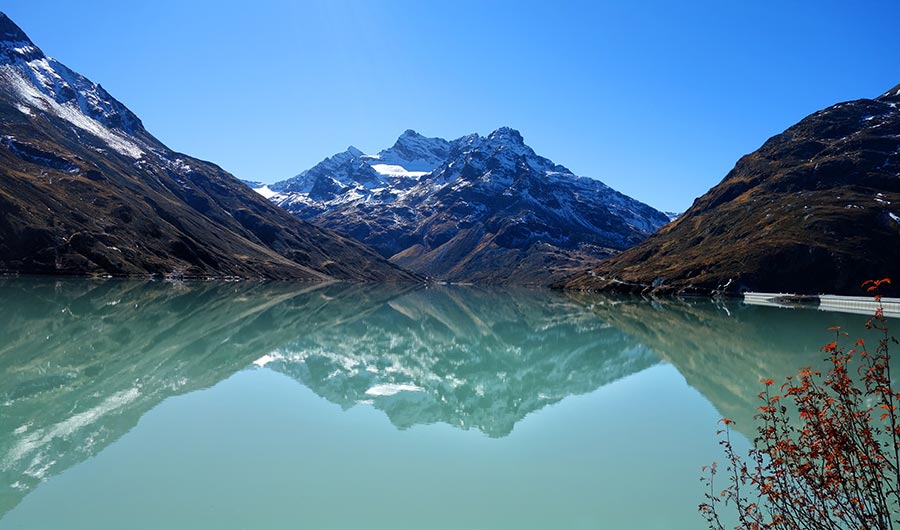 (Inside Science) -- An alpine glacier may seem like the epitome of purity -- crystal-white and untouched. But as glaciers grow, they preserve pollutants from the contemporary environment. Because of climate change, many glaciers are now melting, and those pollutants are once more being released. A new analysis suggests that people who live in the shadow of melting glaciers and eat fish from nearby streams may be at risk from toxins banned years ago.

"If the glaciers were not melting, this would just be stored-away history of human interaction with the environment," said Kimberley Miner, an earth and climate scientist and graduate student at the University of Maine in Orono, who presented the research this week at a meeting of the American Geophysical Union in New Orleans. "But as it is, we're seeing this re-emission because of the increased warming."

The chemicals in question belong to a class called "persistent organic pollutants," which are toxic to humans and animals and can take centuries to degrade. POPs include a category of chemicals known as polychlorinated biphenyls, which were once used in electronics, plastics, insecticides such as DDT and other products. They were produced in large quantities during the 20th century, then largely phased out after 2004 thanks to the Stockholm Convention on Persistent Organic Pollutants.

Like water, POPs tend to evaporate in warm air and condense when the temperature drops, according to Jules Blais, an environmental chemist at the University of Ottawa in Canada who was not involved in the study. This allows POPs to travel with the wind and collect in cold places like glaciers. POP concentrations are highest in glaciers near where the pollutants were first emitted, with the most contaminated glaciers located in the European Alps.

Miner focused on a nearly 2-mile-long glacier in the Swiss Alps called the Silvretta Glacier. Glaciers have unique patterns of POP deposition, and they're all melting on different schedules, so each one will eventually need to be studied separately, said Miner. The Silvretta Glacier serves as a first case study to get a sense of the potential threat.

Miner and her colleagues used a mathematical model to assess the risk to local people based on the level of POPs in meltwater from the Silvretta Glacier, as well as estimates of how much people bathe, drink and eat fish from the glacier-fed streams. They analyzed each type of pollutant separately, using safety thresholds established by the U.S. Environmental Protection Agency. In theory, the different types of POPs could have compounding effects, but that wasn't addressed in this study, said Miner.

According to the model, the POP concentrations in the meltwater were low enough that people could safely drink and bathe in it as much as they wanted. But the pollutants concentrate at each level in the food chain. Fish in the salmon family contain up to six million times the concentration of the surrounding water, said Miner.

Swiss people don't tend to eat that much fish, and they only get about 6 percent of their fish from local waters, according to the Swiss Federal Statistical Office. Nevertheless, the average local fish intake for both children and adults was high enough to put them slightly above POP levels deemed safe by the EPA, potentially increasing their risk of cancer. Children faced higher risk.

"This research further highlights the negative impacts of our warming climate, some of them, such as found by Kimberley Miner, potentially silent killers," wrote Jay Lawrimore, a climatologist with the National Oceanic and Atmospheric Administration's National Centers for Environmental Information, in an email. Lawrimore was not involved in the study, though he convened the session where it was presented.

Miner said she was surprised by the findings, as she had expected her research to offer reassurance that glacier meltwater was safe. She added that the findings represent a first assessment of the issue and will need to be confirmed through more detailed research, including actual measurements of POP levels in people's blood.

"I think that there was an assumption that the pollution levels were so low that there was no circumstance under which they would be impacting human health," she said. "The impacts are much greater than I think what we were expecting to find."

Communities that eat large amounts of local fish could potentially face higher exposure, even if their glaciers contain lower levels of POPs, said Miner. For example, she is currently studying an indigenous community in Alaska, where glaciers have just one to ten percent the POP concentration of glaciers in the Alps. Her preliminary results suggest that the community's fish-heavy diet may put them at risk from POPs.

While many POPs have been phased out, there may be chemicals in use today that could someday come back to haunt us, according to Miner. For example, brominated flame retardants are still commonly added to things like clothing and furniture stuffing, and research has suggested that they can collect in people's bodies and disrupt their hormones and reproductive systems.

"Anything that we put into the atmosphere, we will be able to see somewhere in the environment," she said. "Everything is everywhere."

The University of Ottawa's Blais agrees. Blais conducted some of the earliest analyses of POPs in glaciers in the 1990s, and he hopes studies like Miner's can serve as a wake-up call.

"We have to ensure that we learn as much from these case studies as possible, so that we don't repeat the mistakes of the past," he said.