So-called plastic crystals could open new avenues in the quest to make refrigerators with only solid components.
Image 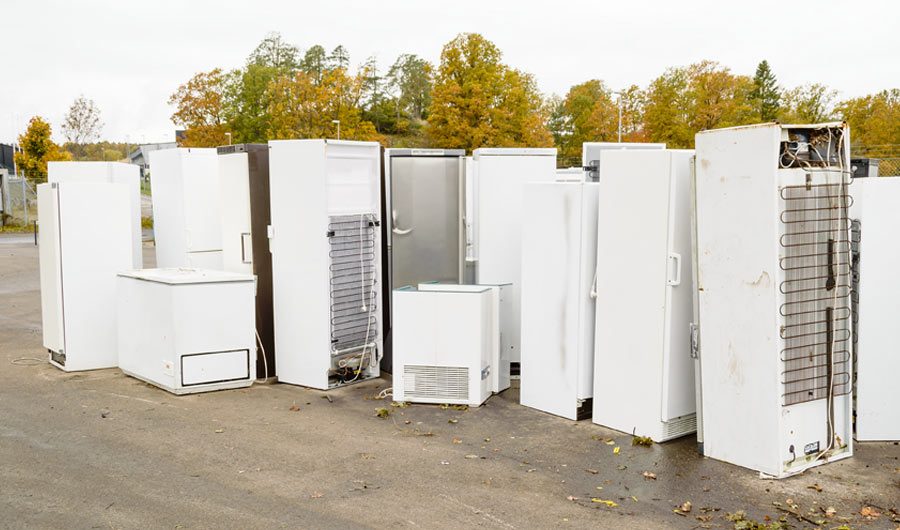 Used refrigerators and freezers stored in a waste station. The gases from standard fridges can harm the environment when they escape.

(Inside Science) -- Refrigeration has been around for about 100 years, but hasn’t changed much in that time. A time traveller from the early 1900s would still recognize the big box full of chilled food in your kitchen. But soon, researchers say, new materials could replace refrigeration as we know it, making it more adaptable, efficient and environmentally friendly.

Standard fridges work using a process called vapor compression. A compressor increases the pressure on a gas, which raises its temperature, and pushes it into coils on the back of the appliance. In the relatively cooler air of the kitchen, the hot gas releases some of its heat and becomes a liquid. As that liquid flows back into coils inside the fridge, the pressure is removed and the liquid evaporates into a gas, absorbing heat in the process.

It’s a simple and effective system that has been refined over a century, but it still has problems.

The main one is that the gases used are terrible for the environment when they escape. One kilogram of a typical refrigerant gas can contribute as much to the greenhouse effect as two tonnes of carbon dioxide.

This motivates researchers to develop other materials that can change their temperature when exposed to pressure, or magnetic or electric fields.

“If we can do the same job with a solid, it will be better for the environment,” said Xavier Moya, a materials scientist at Cambridge University in the U.K.

Moya has been working with a material called “plastic crystals,” which change temperature when put under pressure with a mechanical force. When the force is applied, the molecules in the crystal switch from a disordered phase to an ordered one, and the temperature rises. That heat can be bled off into a heat sink, and when the pressure is removed the molecules go back to being disordered and the temperature falls even further. The crystal can then absorb heat from inside the fridge, starting the cycle again.

Moya and other researchers have recently shown that their plastic crystals are able to undergo temperature changes comparable to those in traditional vapour compression systems. “For many years solids have been lagging behind, so this is very exciting,” he said.

Besides the environmental benefits, solid state fridges can be more compact and adaptable than traditional ones. There is a limit to how small vapor compression systems can be made, and their design is constrained by needing to keep the dangerous, high pressure gases away from people. Without the need for a bulky compressor and extensive system of sealed pipes for the vapor, solid systems could take on almost any shape, and could potentially be shrunk down to give individual microchips their own cooling systems.

“It can change the way consumers interact with refrigeration technology,” said Neil Wilson, chief executive of Camfridge, a company in Cambridge, U.K., that is developing solid state fridges that use materials that change temperature in response to magnetic fields. “It doesn’t have to be one giant box in the kitchen.”

There are still hurdles to overcome, however. Many solid-state refrigeration materials still struggle with a problem called hysteresis, which means that after the temperature of the material increases, it doesn’t return all the way back down to its original temperature, so each cooling cycle becomes less efficient. “Engineering out hysteresis is important to have an efficient cooling cycle,” said Wilson.

Moya’s plastic crystals also require a much higher pressure -- around 2,500 bar, compared with the 50-100 bar used in vapor compression systems. “A lower pressure would be better for safety and efficiency,” said Moya.

Even when they are perfected, it will be difficult for solid-state technologies to dethrone the traditional fridge. Vapour compression is cheap, reliable and lasts a long time, and the industry has made great improvements in efficiency and environmental impact, said Moya. “We’ll need to have something that works very well to replace vapor compression,” he said.

But Wilson said it will not be long before solid-state fridges start turning up in people’s homes. Camfridge is currently testing its magnetic field technology with manufacturers, and expects to bring something to the market in the next two to three years. Moya said plastic crystals are further away -- probably eight to ten years -- and domestic appliances will probably not be the first application of the technology. There are some things that solid-state fridges will be able to do much better than vapor, said Wilson. “We’ll be able to match the technology to the application,” he said.