Snowstorms on Mars and Diamond Rains on Neptune 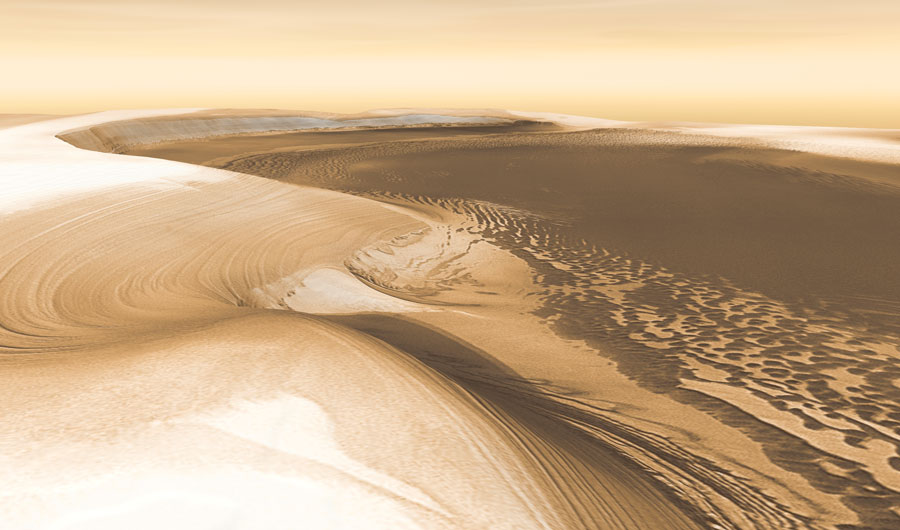 A simulated view of Chasma Boreale, a Martian canyon near the north polar cap.

(Inside Science) -- Two separate discoveries this week show how spectacular the weather can be on other planets in our solar system. First, a paper from Nature Geoscience explains a mechanism that can create snowstorms on Mars. A separate paper from Nature Astronomy discusses how diamonds can rain down on giant icy planets such as Neptune and Uranus.

For years, scientists thought that the dry Martian atmosphere lacks the moisture needed to generate powerful convection-driven snowstorms. Convections are currents of air or liquid caused by an uneven temperature distribution. They are what makes water boil on a stove, and storms form above oceans.

Mars' atmosphere doesn’t have convection currents driven by rising warm, moist air like on Earth, so scientists previously thought that snow could only fall slowly on Mars due to gravity. But the new paper discovered a different convection mechanism that can create powerful snowfall on Mars.

"Convection is actually very simple. All you need is warmer air below and colder air above," said Aymeric Spiga, an astrophysicist from the French National Center for Scientific Research in Guyancourt, France. He is the lead author of the paper. "So, either you can have warming from below, or cooling from above."

Using a computer model that simulates Mars' atmospheric conditions, Spiga and his colleagues discovered that the cooling of the air at night around icy clouds on Mars can generate strong enough convection currents to trigger microbursts -- a weather phenomenon often described as the opposite of tornadoes. The microbursts can then cause the Martian clouds to rapidly dump their content, creating local snowstorms. This new theory can explain some of the previously unexpected turbulent events observed by NASA's Phoenix lander during Martian nights.

"It's a very insightful paper that has a very good explanation for some of the curious observations Phoenix had made," said Michael Mischna, a planetary scientist from the Jet Propulsion Laboratory of NASA in Pasadena, California, who was not involved in the study. "There were a number of theories arguing that [Martian snowfall] was essentially just gravitational settling, but the issues with that is it would take many, many hours for these ice particles to descend towards the surface. This paper explains that you can have this atmospheric instability that is basically turbulently mixing the atmosphere."

While a snowstorm on Mars is still somewhat comparable to the weather we experience on Earth, the "weather" on our larger neighbor planets can be quite bizarre. A separate paper published in Nature Astronomy provides a behind-the-scenes look into the widely hypothesized "diamond rains" on the icy giants of our solar system -- Neptune and Uranus.

Because of the chemical makeup and high pressure of Neptune and Uranus' atmospheres, scientists have long speculated about the possibility of diamonds forming mid-atmosphere, and falling down like rain on these planets. Now, for the first time in history, scientists at SLAC National Accelerator Laboratory in Menlo Park, California, were able to recreate some of the key environmental conditions of these gaseous giants here on Earth. They used high-power lasers to create shock waves that temporarily produce the amount of pressure expected more than 5,000 miles underneath the planets' gaseous surfaces. By re-creating these conditions around a plastic material made of mostly hydrogen and carbon -- the same elements that are abundant in the atmosphere of Neptune and Uranus -- the scientists were able to directly study these diamond rains without leaving Earth.

"The special thing about this experiment is that we started with plastic. We didn't start with graphite or any pure carbon material," said Siegfried Glenzer, a plasma physicist from SLAC and a co-author of the paper.

According to Glenzer, the plastic material they used is much more representative of these planets' content than pure carbon. When the high pressure is applied to the plastic, the carbon atoms separate themselves from the plastic and clump together, forming diamonds.

Since the high pressure produced by the laser only lasts a split second, the resulting diamonds are extremely small -- only nanometers in size. However, if the pressure is sustained, as it would be inside Neptune and Uranus, there is no clear limit on how big these diamonds can get, according to Glenzer.

"After the carbon atoms clump together and form diamonds, they fall down very, very slowly towards the center of the planet over many millions of years," said Glenzer. During this process, the diamonds can continue to grow. So perhaps when F. Scott Fitzgerald wrote his novella "The Diamond as Big as the Ritz," the idea wasn’t as far-fetched as he might have thought.

The success of the laser experiment may also provide a more ecofriendly way to make artificial diamonds. Currently, the sparkly gems are mainly produced with explosives to generate the high amount of pressure needed. The laser method developed by this study can provide a cleaner way to make diamonds.

"Everything comes back to the chemistry. If you can understand the chemistry, it actually tells us a story of how those planets formed," said Mischna. "If we know how our solar system was formed, then when we look at other stars and other solar systems, we can sort of guess how they are evolving with time, and it can help us locate perhaps other stars that can have habitable planets around them."