We explore how powerful your laser needs to be to get noticed on Mars and beyond.
Image 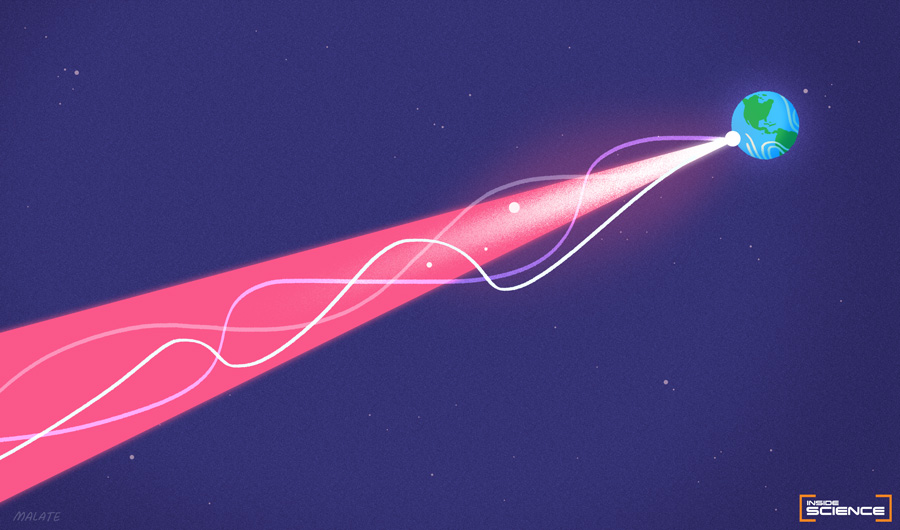 (Inside Science) -- Have you ever played with a pocket-sized laser, wondering how far its light would travel? Could you, a naughty student inside a classroom on Earth, annoy a poor substitute teacher on Mars by waggling your laser pointer at him?​ 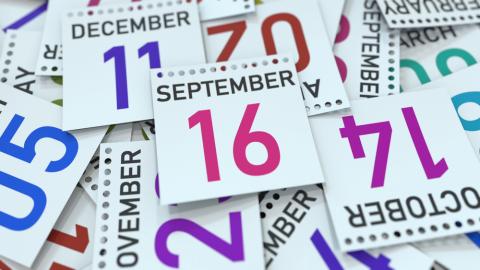 One only needs three rather simple equations for all the calculations done in this article. First, if we assume the laser is optimized so that its spreading angle is at its theoretical minimum, then we can calculate its beam divergence (in radians) using this equation.

Then a little bit of geometry will give us the size of the final lit spot at the destination.

Finally, the brightness at the destination is given by dividing the output power of the laser over the area of the spot.

(The laser's power)/(Size of the spot)

If you didn’t make a mistake in your calculations and kept everything in radians, watts and meters, the final number should be in watts per square meter.

In this article, we will be using these numbers as references.

T​he short answer: no. By the time the light finally reached Mars, the glint would be a million times dimmer than the faintest light visible to the human eye.

But you don’t need to take our word for it. The math needed to calculate the answer is surprisingly simple.

Partly inspired by a talk at a recent astronomy meeting that explored whether we could detect photons from potential exoplanet-dwelling aliens, Inside Science performed some of our own calculations to see if a hypothetical alien Galileo could observe photons coming from Earth.

All we need is an equation for calculating how quickly a laser beam spreads out as it travels through space. From that we can use straightforward geometry to derive the diameter of the beam when it hits its target. Finally, we divide the power output of the laser by the area of the final lit spot and voila! -- that's how intense the laser is at the destination. While the way humans, or aliens, perceive the brightness of this light is much less straightforward, for the purpose of this exercise we treat brightness and light intensity as the same thing.

The power for an average laser pointer is a measly 0.005 watts. However, because of the narrow path of the laser beam, if you pointed it directly at your eye from an arm's length away, the little illuminated dot on your eyeball would be 30 times brighter than the midday sun. So, don't do this at home, or anywhere.

Still, the narrow beam will spread out over long distances. Around 100 meters away from a red laser pointer, its beam is about 100 times wider and looks as bright as a 100-watt light bulb from 3 feet away. Viewed from an airplane 40,000 feet in the air -- assuming there’s no clouds or smog -- the pointer would be as bright as a quarter moon. From the International Space Station, it would fade to roughly as bright as the brightest star in the night sky -- Sirius.

For Starman, the dummy driving the Tesla car that Elon Musk's company Space X recently launched into space, your little red laser pointer would be too dim to notice. If you want to get his attention, you'll need something brighter.

The U.S. Navy might have what we need. According to recent reports, their current goal is to develop a laser that is both logistically practical and powerful enough to destroy incoming cruise missiles. A laser like that would need to put out about 500,000 watts of power -- 100 million times more powerful than your pocket laser pointer. These lasers typically operate in the infrared spectrum, which is invisible to humans. But for the sake of this exercise we'll assume that both Starman and the Martians can see in the infrared.

More Light and Laser Insight from Inside Science:

How Much Starlight has the Universe Produced?

Weapons-grade lasers also tend to have a much larger opening, or aperture, which counterintuitively causes the laser beam to spread out less, thus enhancing the beam’s ability to maintain its intensity over longer distances.

Because of the larger aperture, if the missile-killer laser beam is aimed at the moon, the infrared spot it would make on the surface would only be about 1.5 miles across. For comparison, the incredibly dim red dot from your pocket laser pointer would be 8 miles wide once it reached the moon.

If you could see in the infrared and stood on the moon underneath the military laser’s beam, it would appear roughly 30 times brighter than the full Earth. That’s quite bright, but not blindingly so. It’s still only one-thousandth the brightness of the midday sun on Earth.

By the time the beam reached the Martians -- if we assume the shortest possible distance between Earth and the red planet, which is about 34 million miles -- the spotlight would be about 200 miles across. Its light should still be noticeable -- about half as bright as the brightest star in the sky sans the sun -- but not exactly attention grabbing.

The most powerful laser ever built

Several scientific facilities around the world have huge lasers that operate at more than a thousand trillion watts. In other words, these lasers have as much power as a million trillion pocket laser pointers -- that’s almost a billion laser pointers for every person on the planet!

If run continuously, these lasers would use up the entire world's electricity supply in seconds. Luckily, the only reason these lasers can put out such intense power is that they concentrate the release over an extremely short period of time -- usually less than a trillionth of a second. The extremely short laser pulse is then focused down to a point a few thousandths of a millimeter across, and can be 10 trillion trillion times brighter than the surface of our sun. It's so powerful that scientists are using them to rip apart empty space itself in a quest to learn more about the fundamental laws of our universe.

What if we just want to use this for fun and shoot it at space invaders? One major drawback is that these lasers usually produce ultraviolet light, which is mostly absorbed by the Earth’s atmosphere. If we don’t want to turn our air into plasma, we’d have to construct our building-sized super laser cannon in space instead.

For the extremely brief time we could afford to fire the laser at Mars, it would cast UV light a thousand times more intense than the midday sun on Earth over an area 150 miles across. Let’s hope that the Martians have some SPF-1,000 sunblock handy.

Sadly, as we know by now, there are no little green men on Mars, or most likely anywhere else in our solar system. However, there are thousands of discovered exoplanets -- planets that orbit around stars outside our solar system -- many of which have the possibility to contain life. What if we try to get their attention?

Proxima Centauri, located roughly four light-years away, is the closest star to us and is orbited by several exoplanets. If we aimed our most powerful laser there, by the time the light reached it, it would appear brighter than the brightest star looks to us in a clear night sky. So, four years after we’ve fired our laser, if there's any alien astronomer looking at the right spot in their night sky, they may notice a nanosecond flash of ultraviolet light and go, "What was that?"

Yuen would like to thank Eric Korpela, an astronomer from the Berkeley SETI Research Center for the insightful conversation that led to this exercise. This article is partly inspired by a presentation by Barry Welsh, an astronomer from the University of California, Berkeley, during the 231st meeting of the American Astronomical Society, and also this blog post from “What If?” by Randall Munroe.

Editor’s Note: This article has been updated to correct a previous inaccuracy concerning the distance between Proxima Centauri and Earth. We regret the error.