A new study suggests the ecosystem -- and others like it -- can't be relied upon to remove excess carbon from the atmosphere.
Image 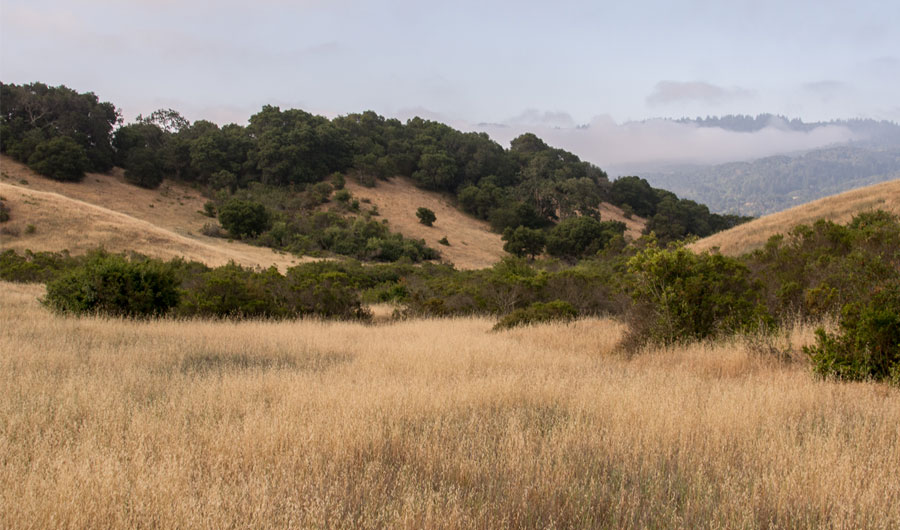 (Inside Science) -- Nearly 20 years ago, ecologist Christopher Field helped launch what's now one of the longest-running, most realistic climate change experiments in the world. Among the rolling hills of Northern California, he and his team set out to test how the region's iconic grasslands would respond to 16 possible future climates.

Now we know the answer: the plants are hot and bothered but hanging in there. But as the climate continues to change, total annual plant growth in California grasslands is expected to gradually decline, according to a new study.

That's contrary to the idea among some scientists that plants, in general, could be expected to thrive under conditions of elevated carbon dioxide, taking up more of the gas as they grow faster and thereby providing one of the last natural defenses against climate change.

So "if we wanted to count on these grasslands to soak up carbon from the atmosphere, that's not going to happen," said ecologist Kai Zhu, the study's lead author who is now at Rice University in Houston.

As a result, the research emphasizes the need to take more proactive steps to combat climate change, said Field, a co-author of the study and one of the country's leading climate scientists, who is with the Carnegie Institution for Science's Department of Global Ecology at Stanford University in California.

The paper was published online today in the Proceedings of the National Academy of Sciences.

Many previous studies have tried to tease out the potential effects of climate change on plant growth, typically by focusing on single factors such as warmer temperatures or elevated atmospheric carbon dioxide. In the experiments that only tested higher carbon dioxide levels, researchers mostly reported increases in photosynthesis and growth across different terrestrial ecosystems as plants reveled in the copious amounts of food like diners at a buffet.

But, in reality, climate change is a bunch of global environmental changes happening simultaneously. Other studies that tested the combined effect of elevated carbon dioxide with warming on plant growth mostly found that the hotter temperatures tended to dampen the stimulating effects of the extra carbon dioxide. And there have been few studies that have attempted to include other interacting factors such as changes in precipitation or the amount of nitrogen deposited on the landscape.

As such, the overall picture of how plants in various ecosystems may respond to climate change has remained fuzzy.

The new research, however, is notable for its attempt to tackle the response of grasslands to four interacting components of climate change -- temperature, precipitation, atmospheric carbon dioxide and nitrogen pollution -- over so many years.

"It's very admirable that they've done the experiment for 17 years. That's extraordinary," said Susan Harrison, an ecologist at the University of California, Davis who was not involved in the study. "And it's really cool that they look at these multiple, interacting factors."

In the summer of 1997, the researchers set up their test plots at the Jasper Ridge Biological Preserve, a nearly 1,200-acre reserve in the eastern foothills of the Santa Cruz Mountains.

For nearly two decades, they subjected their test plots to the full range of conditions climate scientists think we might see over the next 50 to 100 years. Like lords of the universe, they seared their plots with heat lamps, smoked them with carbon dioxide, and doused them with water and nitrogen. 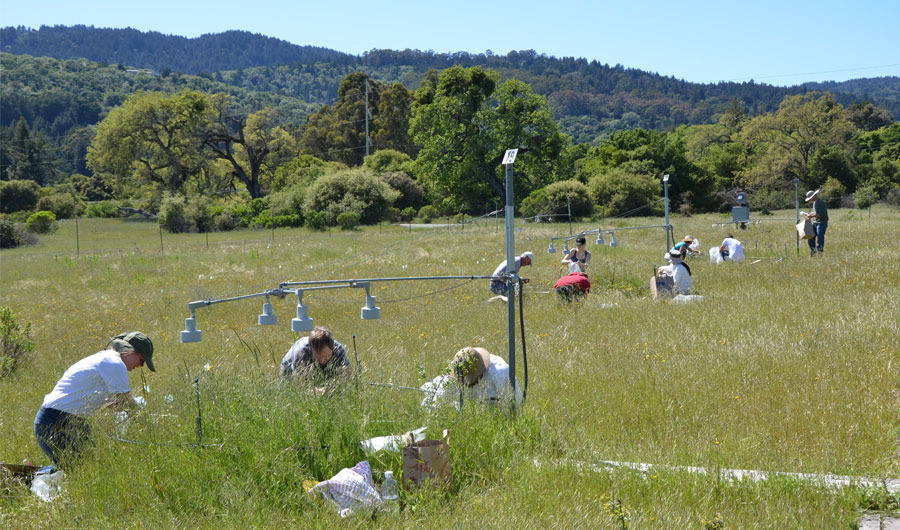 At Jasper Ridge Biological Preserve in California, researchers tend to the experimental plots.

Yet nature reminded the researchers that they were mere mortals. In July 2003, a wildfire scorched part of the experiment. Gophers attempted to pockmark plots with their incessant digging, deer snuggled up under the heat lamps to sleep, and the carbon dioxide drew in hordes of mosquitoes.

"We got bit by millions," Field said.

To further complicate matters, California experiences extremely high natural climate variability. That means the plots went through a medley of good and bad years for growth with the researchers' treatments providing additional layers of complexity.

"Looking for a real strong signal for the impact of climate change on that ecosystem is a little tough, to say the least," said Mark Stromberg, a retired ecologist from the University of California, Berkeley who was not involved in the study.

In all, the researchers found that plant growth in the grassland was highly variable from year to year but that total annual growth declined the further away the experimental conditions veered from the historic average over the last several decades. In other words, the grassland is being pushed out of its productivity "sweet spot" and in the direction of less annual growth and losing carbon to the atmosphere, said Field.

What the researchers didn't find was any evidence of a tipping point, where environmental conditions changed so much that the grassland ecosystem collapsed or reorganized itself into a dramatically different array of species.

"Part of the reason we wanted to run this experiment a long time was to see if we did hit some kind of a trip wire ... We were surprised that we really didn't see that," said Field.

Still, he emphasizes that the results indicate a need for action. "If we want to address the climate change problem, we need to do it by either planting new forests or by decreasing industrial emissions," he said.