A new study shows that the Inuit brought dogs with them when settling North America, and these dogs’ descendants are still working today.
Image 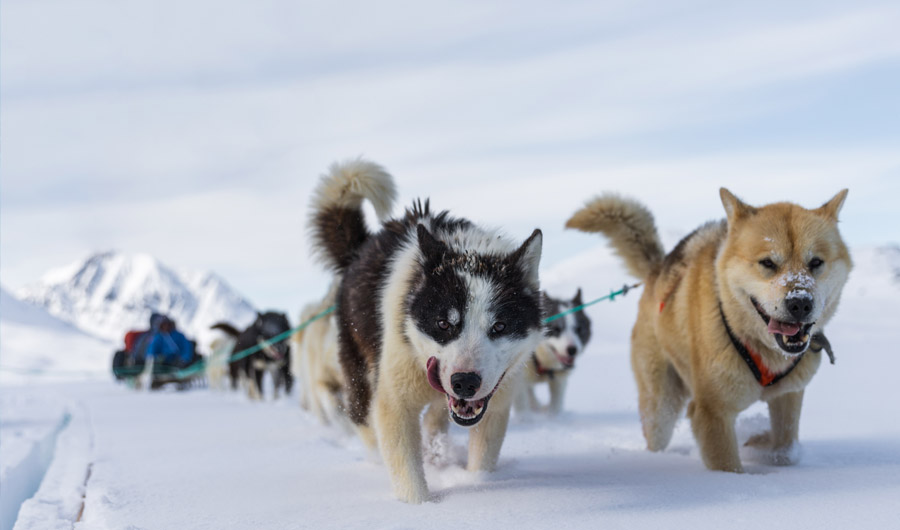 (Inside Science) -- Huskies, malamutes and Greenland sled dogs are fluffy, hard-charging workers. They also share a lineage that can be traced back about 2,000 years. That's when Inuit people began moving from Siberia to the Arctic. Even though dogs were already in North America, the Inuit brought dogs with unique abilities -- and that helped the people survive in a new place. That’s the conclusion of a new paper, published this week in the journal Proceedings of the Royal Society Biology.

The study authors gathered bones and materials from museums in Denmark, Greenland and Canada, as well as clothing material made from dog skin. They compared the ancient remains of 391 dogs and found distinctive skull and teeth shapes. In a comparison of 628 archeological DNA samples from dogs across Russia and Arctic North America, the researchers found unique genetic signatures that were different from dogs already living in North America -- pointing to the fact that they were brought with the Inuit to do specific jobs.

More dog stories from Inside Science:

Dogs were a critical part of the Inuit’s success in settling the Arctic, which happened at lightning speed -- within just one generation, said Tatiana Feuerborn, from the Globe Institute in Denmark and the Centre for Palaeogenetics in Sweden, who co-authored the paper.

She explains that the Inuit’s diet was based on marine mammals, which they hunted from boats. They used the dogs to haul the carcasses back home on sleds. In addition to ferrying dinner around, dogs allowed the groups to move rapidly from summer camps to winter camps. “These dogs were incredibly specialized,” Feuerborn said. “They were adapted to the lifestyle and able to endure hardships in a way that most other dogs aren’t.”

The descendants of the original sled dogs still serve modern Inuit communities in many of the same ways -- working as tools and companions for transportation and acting as an important cultural symbol in the North American Arctic. “It’s no wonder they’re still highly valued and used,” Feuerborn said.