Who Didn't Win This Year's Nobel Prize In Physics

There are many deserving scientists, but only one prize.
Image 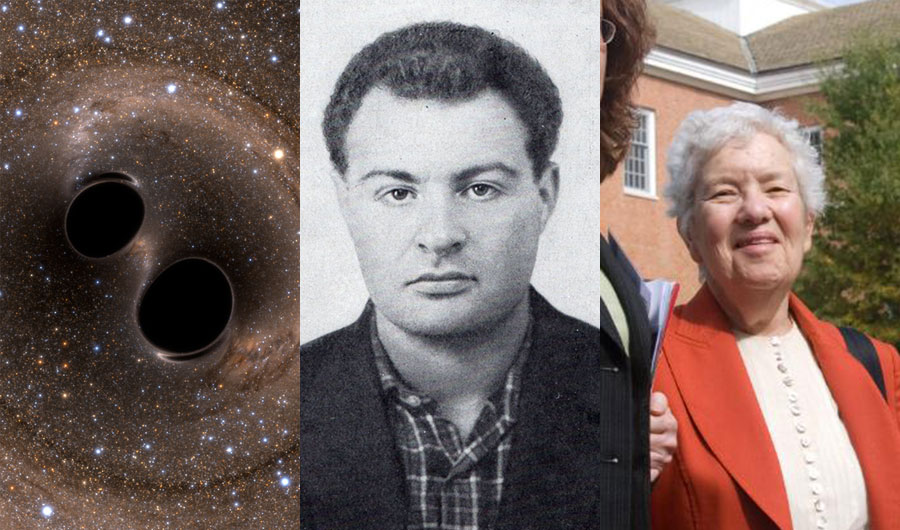 From left to right: An artist's depiction of a pair of merging black holes, a picture of Vadim Berezinskii, and of Vera Rubin.

(Inside Science) -- The cinnamon buns, bagels, and pretzels have been put away. The flurry of Googles searches for "topological phases" and "condensed matter" have subsided. Many stories have already explained the math and physics behind the work that won David Thouless, Duncan Haldane and Michael Kosterlitz the 2016 Nobel Prize in physics. But, as discussed below, sometimes the scientists who didn't get the prize is as much a story as who did.

Whatever happened to gravitational waves?

To the surprise of many, this year's Nobel Prize in physics was not awarded for the detection of gravitational waves. The confirmation of the existence of ripples through spacetime triggered by massive gravitational events like the merging of black holes was widely regarded as the biggest story in physics this year. In particular, the three scientists who founded the LIGO collaboration -- Kip Thorne, Ronald Drever, and Rainer Weiss -- were favored to win.

Instead, this year's prize went to the three theoretical physicists who worked on topological phase transitions. While no official explanation has been given by the Nobel committee, there are a few possible reasons why gravitational waves didn't get the nod this year.

One likely reason is Nobel's nomination deadline. The Nobel committee requires all nominations for the current year to be submitted by February 1. Although the first signal from a gravitational wave was detected by LIGO in September, 2015, the official announcement wasn't made until February 11, 2016, just shy of the nomination deadline.

However, it is unclear how strictly the Nobel foundation adheres to the February deadline. On March 14, 2013, CERN tentatively confirmed the existence of the Higgs boson, and Peter Higgs and François Englert received the prize that October. But that doesn't mean the prize was fast-tracked that year. There were rumors of the discovery in 2011 and even a large press conference in 2012 confirming that a major, heavy particle resembling the Higgs had been found.

Another possible reason is the difficulty of choosing the right candidates when the Nobel rules limit recognition to three individuals or fewer. While many experts recommend Thorne, Drever, and Weiss, there are hundreds more scientists also responsible for the discovery. Then there are those like Barry Barish, who made the building of LIGO possible.

The 3-person limit makes the decision difficult. People have suggested the Nobel foundation revise its mandate -- after all, many Nobel peace prizes have been given to groups and not individuals -- but so far no exception has been made for the Nobel Prizes in science. Although it is exceedingly rare for the Nobel foundation to change the statutes, the foundation does have an established system for proposing and adapting amendments.

Also due to the somewhat inflexible statutes, the Nobel Prize cannot be award posthumously. This further complicates the problem, because many of the scientists responsible for laying the groundwork for gravitational waves are no longer alive. The string of scientists includes Joseph Weber, Hermann Bondi, Felix Pirani, and of course Albert Einstein himself, who are all deceased, which brings us to the next point.

Vadim Berezinskii was born in Kiev, Ukraine, on July 23, 1935, when the city was part of the Soviet Union. He graduated with a degree in physics from Moscow State University, and completed his graduate work at the Moscow Engineering Physics Institute. After finishing his education, he directed research at the Moscow Textile Institute and then later at the Scientific Research Institute for Heat Instrumentation. In 1977, Berezinskii became a staff scientist at the Landau Institute of Theoretical Physics at the Academy of Sciences of the USSR.

During his career as a research scientist, Berezinskii worked on the theory of phase transitions in 1-D and 2-D systems. A list of his scientific publications can be found here.

Vadim Berezinskii passed away in 1980 at a relatively young age of 44. Due to the statutes of the Nobel foundation, Berezinskii cannot be awarded the prize posthumously. He would have been 81 years old today.

Courtesy of the John D. and Catherine T. MacArthur Foundation

Another prominent scientist who studied the exotic quantum phases of matter is Deborah Jin. She was instrumental to the research that proved a previously theorized state of matter called the Bose-Einstein condensate, which led to the Nobel Prize in 2001 for Cornell, Ketterle, and Wieman. Later as a researcher at the Joint Institute for Laboratory Astrophysics, her team successfully made the first fermionic condensate, a new form of matter that only exists at extremely low temperatures.

Jin was picked by the news agency Thomas Reuters as a likely candidate for the Nobel Prize in physics in 2015. She passed away on September 15, 2016 at the age of 47.

Vera Rubin and the lack of female laureates

Another controversy is the dearth of female physics laureates. Vera Rubin is an American astronomer many consider deserving of the prize. She noticed that Newtonian laws of motion cannot accurately describe the observed motion of many galaxies.

As Isaac Asimov once said, "The most exciting phrase to hear in science, the one that heralds new discoveries, is not, 'Eureka! I've found it,' but, 'That's funny!'" Rubin 's discovery directly challenged many well established theories in physics.

While many think Rubin's work is worthy of a Nobel Prize, the wait continues year after year. Rubin is one of the most famous women in science today, so this has also stirred up discussions about possible gender bias in science prizes.

The lack of female laureates is most pronounced for the Nobel Prize in physics. Only two women have enjoyed the accolade -- Marie Curie in 1903, and Maria Goeppert Mayer in 1963. Some argue that gender bias plays a significant role in Nobel prizes, which have previously been unfair to woman scientists, and the trend persists to this day.

But there could be another reason Rubin has not been recognized. While Rubin's revelation is extremely important, the galaxy rotation problem remains one of the biggest mysteries in science. Many theories have been proposed, including the famous theory of dark matter. A definitive solution, however, remains elusive. For reference, Peter Higgs and François Englert, who developed the theory for Higgs boson in the 1960s, didn't receive the Nobel nod until their theories were verified in 2013.

At the age of 88, Rubin's wait for her Nobel Prize continues.