Manufactured rhino horns are criticized by conservation groups, but some economists think the conversation should stay open.
Image 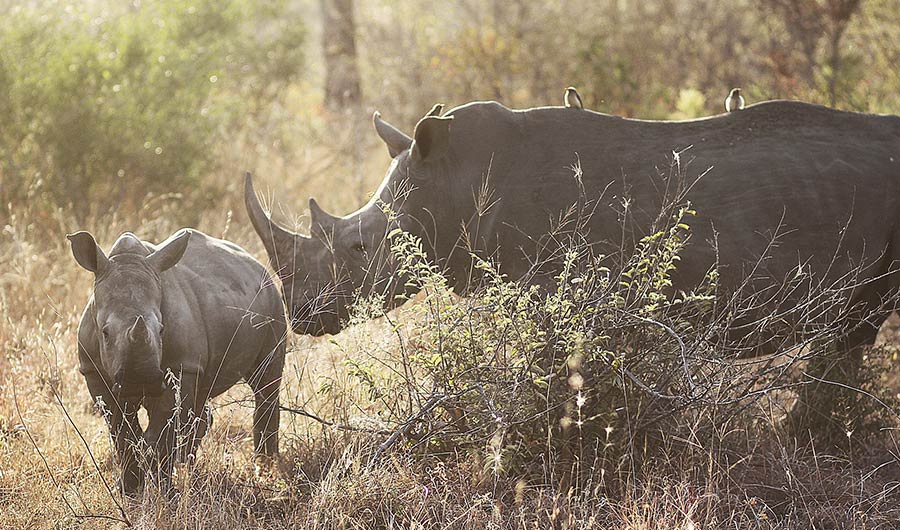 A rhinoceros and its young in the South African bush

(Inside Science) -- At the turn of the 20th century, half a million rhinoceroses roamed the Earth. Now fewer than 30,000 are left, threatened by habitat loss and the spread of poaching.

Conservation advocates focus primarily on making poaching more difficult. However, some entrepreneurs argue they can reduce the incentive to poach by disrupting black markets with synthetically made horns. The idea is controversial, but to economists it’s an opportunity to discuss how business strategies might contribute to saving endangered species.

In South Africa, poached rhino horns are worth up to $3,000 a pound. Outside of the country, wholesale price can leap to $30,000 a pound. Rhino horns are especially popular in China and Vietnam, where a third of all rhino horn seizures have occurred since 2006, despite the current ban on international commercial trade. The two nations’ wealthiest citizens buy horn in the form of ornamental carvings or medicinal powders.

Belief in rhino horns’ healing capabilities dates back to the second century B.C., as the powder was reported to reduce heat and remove toxins. Demand for horn products has greatly increased since 2008, and today rhino horn is more often valued as an exclusive status symbol.

Synthetics: an environmental promise or problem?

Matthew Markus, CEO of the Seattle-based biotechnology company Pembient, sees this preference for rarity as an opportunity to reduce poaching. Over the past few years Pembient, along with other companies like CeratoTech and Rhinoceros Horn LLC, has started 3-D printing biologically similar artificial horns. This idea isn’t exclusive for rhinos either, as Pembient aspires to biofabricate pangolin scales, elephant tusks and tiger bones as well. At the University of Oxford one biologist is working on synthetic elephant ivory.

Currently, Pembient’s process involves engineering yeast cells to produce keratin, the predominant protein found in rhino horn, which is then combined with rhino DNA and trace elements. This aggregate makes up the “ink” for printing. So far, Pembient has only created low-fidelity miniature horns, but plans to have larger higher grade prototypes in less than two years. The horns aren’t commercially ready, but Pembient has already received interest from artisans, carvers and industrial designers.

Markus claims that introducing indistinguishable biofabricated horns at one-eighth of the price for real horn would lower wild rhino horn value. “At some point we would crash through the illicit profits that motivate people that go out there and risk their lives,” said Markus.

Markus expects that synthetic rhino horns would perturb market forces on three different levels. First, Pembient plans to sell synthetics under a legitimate label, providing products for consumers that are interested in biofabricated horns. Markus then assumes that occasionally wild horn traders will try to pass off Pembient’s fake horns as the real thing. Last, Pembient has expressed interest in leaving some of their synthetics for poachers to find in the wild. From these angles Markus believes synthetics will diminish rhino horn exclusivity and generate uncertainty.

“The sale of synthetic horn at a cheaper price could promote a culture of use of 'horn' by those that currently cannot afford real horn,” wrote Michael Knight, chairman of the IUCN African Rhino Specialist Group, in an email to Inside Science. “This could possibly expand the market for real horn in the future, and undermine current demand reduction campaigns.”

The Center for Biological Diversity and WildAid, two conservation organizations, petitioned to the U.S. Fish and Wildlife Service to ban synthetic rhino horn exports in February 2016.

Chen claims that synthetically made rhino horns could disrupt the current market, but only under certain conditions. He cautions that conservation efforts from for-profit companies are compromised by their drive to generate profit. He predicts that companies wouldn’t supply enough synthetic horns at a low enough price to truly eliminate the real horn market.

Chen also warns if perfect or even superior horn substitutes generated enough demand, companies may set a higher price for synthetics, giving poachers enough monetary incentive to continue selling real horns. He instead claims that companies would more effectively reduce rhino horn demand if there was a subtle consequence for ending up with a synthetic horn. If, for example, biofabricated horns were too brittle to elaborately carve or induced mild nausea if ingested, yet were initially indistinguishable from real rhino horn, product distrust among consumers would spread. According to Chen, the fear of accidentally buying an inferior fake horn would drive down the demand and cost of real horns.

Chen acknowledges that his proposal isn’t a money-making strategy. “What for-profit company wants to make a product they know people will not find desirable?” He instead favors a model in which synthetic building technology is adopted by agencies that aren’t confined to profit maximizing mandates, a suggestion that Markus envisions Pembient could one day follow. “We’ve always kicked around the idea of becoming a public benefit corporation where we could pursue our two goals of profit maximization under the constraint of poaching minimization,” said Markus.

More on poaching and conservation from Inside Science

Saving African Elephants May Be Worth the Cost Economically

There is still disagreement over synthetic market strategies among economists themselves. Doug MacMillan, an economics professor at the U.K.'s University of Kent who was not involved in the study, agrees with Chen that biotech companies with profit-maximizing interests are unlikely to eradicate real rhino horn markets, but thinks inferior synthetic horns raise ethical issues, especially if the horns purposely induced stomach issues. “We have to be careful that we’re not imposing Western ideas and perceptions on this,” said MacMillan.

In the past, making illicit products undesirable has been a controversial tactic. During Prohibition the U.S. federal government contaminated industrial alcohol in an attempt to deter bootlegger activity, an action that reportedly was responsible for more than 10,000 deaths. In the 1970s and ’80s, the U.S. sprayed illegal marijuana fields in Mexico with mildly toxic herbicides.

Instead MacMillan is interested to see if biofabricated products would be a legitimate rhino horn alternative in traditional Chinese medicine. Pembient conducted a survey in Vietnam in 2014 and found that 45 percent of the respondents would consider using synthetic horn instead of real horn.

MacMillan has also studied Vietnamese rhino horn demand and thinks rhino ranches, which account for 20-25 percent of South African’s rhino population, have the most potential to curb poaching. “People would prefer to consume rhino horn from an animal where the horn was harvested from a live animal without any suffering,” he said. Rhino horns, like our keratin-rich finger nails, grow back, and rhino farmers have been legally stockpiling horns for years. This year South Africa made the controversial decision to lift its ban on domestic horn trade, meaning that ranchers may now sell their horns, but only to South African buyers. One famous rancher in particular, John Hume, has announced plans to auction off part of his five-ton trove of horns soon.

Ultimately, the potential for synthetics depends on how lifelike it can be. Similar to conservation group sentiments, MacMillan and Chen question the feasibility of producing horns that are genetically and chemically similar enough to pass as the real deal. “Vietnam, it’s a land of fakery,” said MacMillan. “You can’t fool the elite networks.” In his paper Chen drew parallels to De Beers, the world’s leading diamond supplier. When faced with a rising synthetic diamond market, they invested in technology that differentiated mined diamonds from manufactured.

If biotech companies did succeed in producing indistinguishable fake horns, conservation groups worry that synthetics would make black market policing an even bigger logistical headache. “Fake horn would also give any apprehended criminal traffickers an ‘I was sold this as a synthetic horn’ excuse,” wrote Richard Emslie, a scientific officer for the African Rhino Specialist Group, in an email to Inside Science. This has been the case for ivory, as traders from China and New York have sold elephant ivory with a mammoth ivory label.

Despite debates over which strategies would save rhinos from poaching, a number of economists think it’s necessary for conservationists to consider market-driven wildlife protection. “The downside is worse if we don’t try something different,” said Chen.