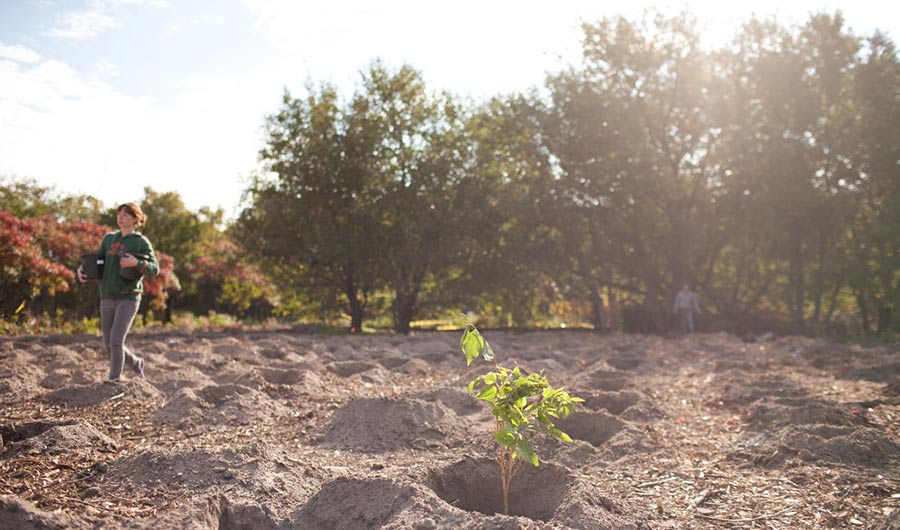 (Inside Science) -- Amid wildfires, climate change, insect outbreaks and deforestation, news about forests can seem like one long-running disaster. But a new study bucks the trend. Satellite data have revealed that trees cover far more ground than they did three and a half decades ago, with major gains in places as varied as abandoned farm fields, high mountain slopes and Arctic tundra. Perhaps even more surprisingly, human decisions drove most of the arboreal expansion.

The finding vividly illustrates humanity's global footprint, said Gordon Bonan, a climate scientist at the National Center for Atmospheric Research in Boulder, Colorado. “A huge portion of the world has undergone change in the past 35 years,” he said. “We know that change has profound implications on almost every aspect of the world, from climate to freshwater to biodiversity to food and timber and fiber.”

“It’s going to be a landmark paper,” said Robin Chazdon, an emeritus professor at the University of Connecticut in Storrs.

Despite thousands of years of tree cutting, forest destruction and regrowth, forests still cover roughly a third of the planet. These forests harbor much of the world’s biodiversity, store immense amounts of carbon and provide water, food and materials to billions of people.

Getting a global view of such changes has been challenging, however. Over the past few decades, scientists have increasingly eyed forests using satellites, which can scan remote areas and gather huge amounts of data quickly. In 1994, researchers at the University of Maryland, College Park used data from the Advanced Very High Resolution Radiometer, or AVHRR, a light-measuring instrument aboard a series of 16 weather satellites, to make the world’s first global forest map. The map comprised squares, or pixels, more than 100 kilometers on a side -- larger than Rhode Island.

Researchers have vastly improved forest mapping since then, training computers to recognize trees based on the wavelengths of sunlight that treetops reflect, shadow patterns, and other visual features. Maryland geographer Matthew Hansen’s team uses such methods to produce continuously updated online global tree cover maps based on data provided by the Landsat satellites, which are operated by NASA and the U.S. Geological Survey, and whose photos have pixels 30 meters on a side, roughly the size of a baseball diamond. Earlier this summer, the World Resources Institute, a Washington, D.C.-based environmental organization, used such maps to determine that a Bangladesh-sized area of tropical forest disappeared in 2017 -- the second-worst annual total on record.

But telling the other side of the story -- how much tree cover is growing -- is much harder, because from above, young trees look a lot like other vegetation. “Tree cover gain is kind of a blind spot for us right now,” said Mikaela Weisse, who led the tropical forest analysis for WRI.

To tackle this challenge, Xiao-Peng Song, a postdoctoral researcher working with Hansen, used daily images that AVHRR took of Earth’s entire surface between 1982 and 2016. The longtime series offered by the older instrument allowed researchers to spot new trees as they grew large enough to be detected.

For each year, Song compiled a global map comprising pixels around 5 kilometers on a side -- the size of a small city. He trained computers to determine what fraction of each pixel contained trees 5 meters tall or higher, and what fraction contained bare ground. He assumed that the portion of each pixel not in these two categories contained short vegetation such as shrubs, grass and farm crops. Song found that since 1982, tree cover gain had outstripped loss by 2.24 million square kilometers, almost the area of Alaska and Texas combined.

Much of the trees’ gains came at the expense of bare ground, which includes desert, tundra, mountaintops above tree line, cities and other non-vegetated land: In total, some 1.16 million square kilometers of formerly bare ground, roughly the area of Texas and California combined, is now covered by trees or other vegetation.

Song then looked at a sample of much sharper images from Google Earth to try to determine why trees were growing in different places. Trees had recolonized vast stretches of poor farmland that were abandoned after the Soviet Union’s collapse, he found; they similarly expanded into former farmland in the eastern U.S. Forests also regrew in parts of India where the “Green Revolution” ushered in more efficient farming practices in the 1960s and ’70s, and in China and the African Sahel, where governments have sponsored massive tree-planting programs.

Elsewhere, a warming climate allowed trees to move up mountains and into Arctic regions that would previously have been too cold, and trees disappeared in the tropics and in semiarid regions such as the American Southwest -- all phenomena observed in previous studies. “We have an Earth surface that is changing a lot,” said Hansen.

In total, Song, Hansen and their colleagues determined, humans directly caused 60 percent of the tree cover changes from 1982 to 2016; climate change and other influences accounted for the rest, the team reports today in the journal Nature.

The study provides “a more complete look at what’s happening with vegetation on land globally” than what scientists had before, and reveals how forests are being redistributed from the tropics to the higher latitudes, said Chazdon. “It kind of sets a new standard.”

But it won’t be the last word. AVHRR’s coarse view compared to modern satellites means that the team may have missed patches of trees regrowing in savannas or farm fields, Chazdon notes, and can’t distinguish between different types of trees or even between natural forests and plantations. “You kind of have to have a very blurry view of the world.”

That limitation could make it hard for Weisse to use the data to inform policymakers and the public about forests. She called the study “a really good start” toward a sharper, annually updated view comparable to what’s available for tree cover loss -- which Hansen and Song say they are working on.

But Song’s maps are sharp enough for Bonan, who plans to use the data in computer simulations that predict Earth’s future climate. Knowing where trees grew and disappeared over 35 years will help his models more precisely project where future forests will grow, and how they will influence weather, water availability and other factors that affect people’s lives.

The study is “a nice new analysis,” Thomas Crowther, an ecologist at ETH Zurich in Switzerland, wrote in an email. In 2015, Crowther estimated that the world loses more than 15 billion trees per year; he now believes the number is likely smaller.

But that doesn’t mean the world’s forests are doing well, he cautioned. The higher-latitude temperate and boreal forests where trees gained ground are less biodiverse than tropical forests, and do less to pull carbon out of the air and slow climate change. “The re-growth of smaller trees in the higher latitudes is a good thing, but it will not do anything to offset the losses that we have in the tropics,” he wrote.